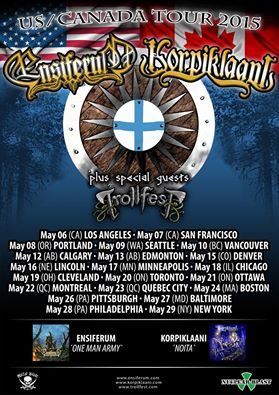 TROLLFEST/KORPIKLAANI/ENSIFERUM
Phil and I are made are way down to the venue which was over 80 miles away so we left at 5 o’clock or so to get there….luckily traffic cooperated and we were at the venue right before 7PM finding parking less than 2 blocks away. We had a hold up with my press credentials but thankfully the young lady behind the counter was able to get them for me. Unfortunately we missed local hardcore folk openers Frost Giant who went on at 6:30. Just as we were walking in I could hear the crowd roar so we knew Trollfest was coming on!!!

TROLLFEST
I was looking forward to seeing Trollfest the most of the main three bands and they certainly did not disappoint. Their 45 minute set was primarily made up of songs from “Kaptein Kaos” and Brumlebassen” with a few extras thrown in for good measure. The sound was really good and the crowd with each passing song really got into them more and more. Opening with “Kaptein Kaos” and “Vulkan” the crowd went bananas with their cover of Britney Spears “Toxic”. They blasted thru “Brumlebassen” and “Die Grosse Eschen” before “Konterbier” which was a surprise for me. “Ave Maria” “Bose Tivoli” and “Solkskinnsmedisin” were next and they wrapped up with “Brakebein”. Both Dr. Leif and Lodd Bolt took turns running into the crowd during the set and the live version of all of the songs were made so much heavier with the inclusion of Trollmannen and Bok’ N’ Brusetruse also playing drums. Mr. Seidel, TrollBANK and Manskow all were in perfect Trollfest form during the set. Alas, no “Der Jegermeister” was not played but a killer set nonetheless!!!
9/10

KORPIKLAANI
The crowd was really excited for Korpiklaani to come out and they certainly started off on the right foot playing the first three songs from “Noita” but as the set went on they had a very subdued mood and lost a lot of energy for me. They sounded as good as always but a major part of the set was kind of sleepy for me. Tuomas (Violin) and Sami (Accordion) seemed to have the most energy, especially playing off of each other and they were the highlights of the set for me. They did redeem the set a little bit at the end by playing “Vodka”, “Rauta” and “Wooden Pints” right in a row but overall I think the set lacked a little energy. While the sound was great I thought the performance was a little flat especially after seeing Trollfest
7/10

ENSIFERUM
Phil and I were interviewing the Trollfest guys when Ensiferum came on and we had to leave before their set was over so a “real review” is not fair for them. What we did see were songs off the latest album “One Man Army” which were played decently. The crowd was really into them the most of the bands. Sami of course was a whirlwind on bass as always while guest accordionist Netta from Turisas (filling in for Emmi) was a great choice for the spot bringing additional energy to the set. What we saw of them was good but still not on par with the show that Trollfest put on. I would still give them a 7 even without seeing the whole set
7/10