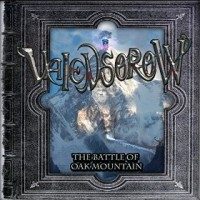 There is a popular phrase that I am sure many of us have used…”Bang for your buck”…. if you are unfamiliar with it, it basically means getting more than you thought for your dollar or a high value for not spending a fortune…Valensorow certainly delivers on the “Bang For Your Buck” phrase with their newest album “The Battle Of Oak Mountain”. Before embarking on the listening journey with Valensorow, I made sure to check in again with their debut LP “Neptus” from 2013…. refreshing that less than two years later they are delivering a new full length in this day and age where you may wait 4-5 years for new material from some artists. Style wise, I think comparisons to other American folk metal acts like Wilderun and Yonder Realm are pretty spot on with guitar driven folk metal with a dash of folk instrumentation, rooted in thrash and melodic death.
Clocking in with 13 tracks at just over 61 minutes, there is definitely a lot of material here to sink your teeth into and what a delicious meal it is indeed. I think this time around there is more of a common thread throughout the album as opposed maybe to just tracks on the first LP but not in a concept album sort of way, but more of just a feel. There is more attention to song structure and melody here as well, with plenty of examples of twin guitar tradeoffs and harmonizing. The tracks here also have a very lush, layered sound to them thanks to a killer production with just as much edge to it as smooth detail. That being said, this is still a very heavy album by folk metal standards. Tracks like “Deloth’s Stone” are on the verge of just straight death metal but they rein themselves in and still are firmly planted on this side of the metal fence. “Amystica” and “Climbing The Altroneuct” and “Interlude #1” and “Interlude #2” will show just a touch of the diversity that Valensorow offers with instrumental portions that break up the heaviness and twist the songs into something fresh and different and not just blast beating for blast beats sake. “Ode To The Woodtroll” and “Knightvale” maybe the folkiest tracks in their catalog now which remind me of a mix of Nekrogoblikon /Finntroll/Trollfest tracks with a hodgepodge of instruments and time changes….nothing wrong with those comparisons.
This is another triumphant release for Valensorow that I certainly would think should really get them the attention they deserve. A decent sized tour would certainly be welcome for them to showcase their wares….. Excellent release.