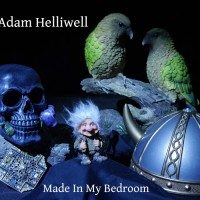 We have what I would call a little bit of an unusual release…., a release from a solo artist as opposed to a full band/project. Adam Helliwell is a solo artist from New Zealand who has just released and EP entitled “Made In My Bedroom”… not a very metal title but at least accurate as he does all of his recording in his bedroom home studio.
Upon my first listen the first band(s) that came to mind was Falconer/Mithotyn as a similar sounding project and then upon additional listens I was reminded of maybe Grimner or Baldrs Draumar but less folky and a little more straightforward metal. The EP is comprised of 5 total tracks starting with the obligatory instrumental/sound effects “Intro” and then goes into the remaining original tracks “Leif Ericson”, “Fog On The Barrow Downs”, “We Ride Away” and then ends with a cover of sorts……a version of “Trollmors Vuggesang” which could best be described as traditional lullaby reworked into a metal version.
Adam sings in a clean style which is refreshing in a genre that is typically smothered in grunts, growls and screams (which I love by the way) but is nice to be able to hear actual singing for change. There is nice layering of vocals hear which adds a little more texture and interest to the songs. The songs are all a few minutes in length and are not overly done and are pretty simple arrangement wise. The tracks are very catchy and have just a dash of folk (Celtic or Scandinavian) in their style (especially in “We Ride Away” and “Trollmors…..”) but are more or less just basic metal tracks.
I think this is a great first effort and I am interested in hearing more for sure. Production may be a little boxy sounding but for a homemade project it is definitely better than most. I would love to hear a little more in the instrumentation department or maybe some longer tracks to see what he could do with them as well. While not too heavy or folky, I think this a nice beginning and something Adam can use as a stepping stone to more ambitious work……