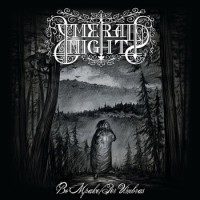 There are more and more Russian folk metal bands around. Emerald Night was one of the first ones, releasing their First single in 1996. Per Umbras is only their third full length album and it is quite enjoyable.
It’s folky enough, with a flute and other odd instruments here and there. Happy tunes, a growling man and a clear singing woman. Singing in Russian. What’s not to like? In fact not much. The production is professionally done, the songs are structured well. Each musician knows how to play his instrument. Sometimes it reminds me of Little Dead Bertha, also from Russia. The lyrics are entirely different though. More power metal like, about magic swords and white horses. But never mind, because unless you are Russian, you can’t understand what they are singing about anyway.
A song like Celestial Battle appeals to a wide audience. Most of the songs have a clear beginning, body and end. Night Review starts like a ballad, forms into a midtempo metal song and ends with a duet of the soprano Ruma with Dismael in the background.
The album ends with ‘Is that you, Melissa’ from Mercyful Fate. A surprising choice for a folk metal band, but nicely done. Staying close to the original and yet different because of the female voice.
The only faults I can find is that I would like a band to have a sound more of its own, especially one that has been around for almost 20 years. And, while the songs are in itself all nice and good, there is not one song that really stands out among the rest. It’s just not very memorable. Nonetheless, if you like sort of middle of the road folk metal, with all the elements there and a crisp production, by all means, have a listen.