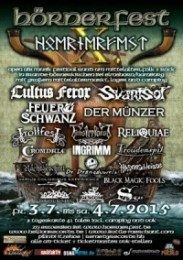 A heat wave has passed over Europe, but this doesn’t stop Folk-metal.nl from visiting various festivals this summer! This week we travel to Brande-Hörnerkirchen in the north most part of Germany, for the annual Hörnerfest festival. Hörnerfest offers a variety of folk (metal) bands, medieval food and beverages, a medieval market, fire shows and whatnot. This festival has become one of our favorites over the last couple of years, due to the relaxed and open nature of the festival. Time to set up camp and enjoy the variety of bands that Hörnerfest has to offer us this year!

Svartsot is one of the main acts on the first day of the festival. As expected, the Danes attract a big audience and put up a great and energetic performance. With their combination of cheerful folk tunes, harsh vocals and folk metal the band was a perfect choice for a night of partying. The heat was finally gone, which resulted in a large moshpit and people banging their heads fervently. The first half of the set started out great, but unfortunately the band lost a lot of appeal in the 2nd half of the set. The songs were very repetitive and seemed to drag on forever. This could be due to the relatively long stage performance. Nonetheless, a great performance and a nice warm-up for the true party band of the evening, Trollfest!
8/10 – Yvette

Trollfest
After Svartsot had warmed up the audience, it was time for Trollfest to enter the stage. This crazy band from Norway creates true Norwegian Balkan metal, or so they say. Technically speaking the music is a humorous combination of folk metal, lounge jazz, blastbeats, screams and saxophone that appeal to a wide audience. It was no surprise that a lot of people came to see these deranged Norwegians on stage. From the very first note until the end of the set, the band managed to create a great atmosphere that resulted in a lot of people dancing, jumping, moshing or doing the Macarena. The crowd went wild with enthusiasm, and was eager to party after being terrorized by the heat all day long. My expectations for this show were high, but Trollfest definitely delivered!
8,5/10 – Yvette

Rabenwolf
One of the big surprises for me this year is the German band Rabenwolf. The band creates a typical combination of folk metal with lots of black metal influences. Harsh vocals are combined with traditional folk instruments that create a nice sinister atmosphere. Although the songs are interesting and diverse, the performance of the band is mediocre. However, this doesn’t stop the audience form moshing and banging their heads to the music. Unfortunately it was too hot outside to really be able to enjoy the band all the way, but Rabenwolf put up a surprisingly well performance.
7/10 – Yvette

Finsterforst
Finsterforst was one of the reasons why I really wanted to go to Hörnerfest this year. Although the band is a typical example of German folk metal, Finsterforst has managed to create a unique and recognizable sound that is characterized by raw vocals, a heavy dose of accordion and guitar violence. Although the temperature outside left a lot of people searching for shade and refreshment, the band managed to attract a pretty big audience. This was no surprise, as German folk metal always tends to do well on German festivals! The band played a long but diverse set that really managed to capture the audience’s attention. Fast up-tempo songs were interspersed with slow and intense intermezzo’s and a healthy dose of humor. Finsterforst put up a great show, and despite the heat I’m really glad I got to see these guys live again.
8,5/10 – Yvette

Ingrimm
Finally, the hottest part of the day already passed when Ingrimm captured the stage. With their harsh mix of Thrash and Folk, and with a new vocalist, I was curious to see how the band would perform. And I must say, the band didn’t play bad. The vocalist knew how to capture the audience, which resulted in a few moshpits and a lot of head banging. However, the music itself felt pretty shallow and straightforward. Although the musicians did their job, 70 minutes of the music was a bit too much in the burning heat. Okay, but not really special.
6/10 – Nick

If you say German folk festival you say Feuerschwanz. It has become more or less of a habit for these guys to perform on every German folk(metal) festival lately. Needless to say that their humorous medieval folk rock songs about mead, women and song are becoming a little cliché. Feuerschwanz always manages to put up a great stage performance in their ridiculous medieval outfits, but somehow the songs just don’t seem to be all that interesting anymore. Perhaps it’s because the band is basically everywhere, perhaps it’s the heat, perhaps it’s the lack of mead, but I’m unable to keep my attention on the stage. Fortunately for the band, most people are drunk and dance and sing along anyway, but in my opinion the performance was a bit disappointing. Decent, but nothing special, been there done that. 6,5/10 – Yvette

Haggard
Haggard was this year’s headliner, just as it was back in 2010. The music of the band is beautiful, and extremely well executed. Classical music with a folky touch is what Haggard brings to the stage, a stage that was completely packed by over 20 musicians. And although the music was close to perfect, it seemed that less and less people seemed to enjoy it. The heat was finally over, more or less, gone, and people were ready to party for one more time: something that’s quite hard with a band such as Haggard. Great performance, though some of the audience seemed to expect a band that was more suitable for partying. 8/10 – Nick