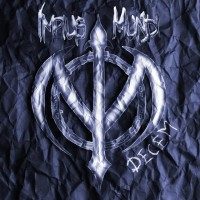 Impius Mundi has released their newest album entitled “Decem” following the release of the full length “Diese Nacht” back in 2013. Although they tout themselves as “medieval rock”, I tend to think they have a more straightforward rock sound with a Celtic influence more than medieval sound to them but that is just my perception. Of course with bagpipes aplenty, the comparisons to some acts like Saltatio Mortis and Harpyie are sure to be close to describing their overall sound.
The songs are not overly heavy here and are I feel are pretty accessible and border on being pretty mainstream. I was hoping for a little bit of a heavier sound to this album especially after watching some of their live performances on You Tube over the last few years but despite having 6 musicians in the band, the album lacks a little bit of bite to it in the metal department. Their live performances seem to do a better job of capturing a sound I am keener on listening to. Tracks like “Verdammt Sein” and “Feuertanz” will surely get any crowd going for sure. They also show some diversity with some beautifully crafted songs deeper into the album like “In Ein Grunes Land” and “Augenblick” with a simpler more acoustic based sound with the pipes and fiddle carrying the tracks. The recording is pretty decent but not as heavy as I hoped but clean and mixed well across the board.
Overall, Impius Mundi has put a decent album together and is def worth checking out…if you are hoping for a folk metal release, it may not be as heavy as some others out there, Impius Mundi is for the fans of Medieval Rock, but it has enough of the Celtic and medieval in the mix to keep it interesting…..