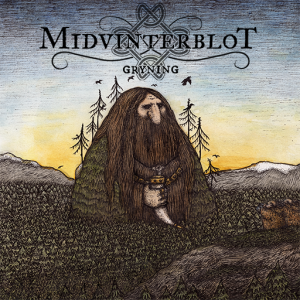 It has been 3 years since we heard from Midvinterblot after the release of their début single, the epic “Rise Of The Forest King”. They have returned from the forests of Sweden boasting 8 members now and offer a new 5 song EP called “Gryning” (“Dawn”). Where the single “Rise…..” clocked in at just under 8 minutes, the songs on this latest release are averaging about 4:30 minutes in length which equals packing more folkiness into half the time. There definitely seems to be a little more focus in the songs here despite having to cram 8 musicians into the mix…. not necessarily all of the time are all 8 playing but just so that everyone is involved.
There is definitely more diversity too in the style of tracks which will help in establishing some direction where futures release will head for sure. My initial reaction when hearing this was to compare them to Grimner (another fine Swedish export) with a hint of some Korpiklaani and Arkona so a fine foundation to build upon for sure. The EP does not start with an instrumental (can you believe it?) but rather the title track which kick things off in up tempo folk metal fashion, throwing everything at you in their arsenal with Swedish lyrics. Next track “The Feast” continues with another barrage in the same vein as “Gryning” with this track and all remaining having English lyrics.
“Spell Of Night”, while still folky has a little darker content to it.
“Under The Barrel” (much like “The Feast”) brings the fun back singing about drinking and such. Closing track “Demise” has a gloomier feel like “Spell Of Night”…. not as up tempo and moodier. All in all, there is a little something for everyone on here and repeated listens you will really get into this one more and more. The production is solid considering how many musicians are involved here with nothing getting lost in the shuffle and everything having space to breathe.
Midvinterblot has some major potential here and it is definitely worth checking out…..let us hope that we are not waiting 3 years for the next release and that a full length is coming soon.