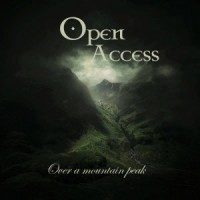 It is well-known that folk metal comes in many flavors. This is something that the band Open Access emphasizes like no other. This young band from Cracow Poland releases its debut EP album ‘Over a Mountain Peak’, and delivers a fine combination between folk and power metal with some oldschool thrash metal influences. The band that was established in 2012 had a lot of changes in the lineup, but despite this they have performed on several small festivals and even had a tour in Poland back in 2014. Although the band has a lot of influences from bands such as Elvenking, Vexillum and even Arkona, Open Access has managed to create a rather unique sound of their own.

The album kicks off with ‘Vengeance’, in which a dark and eerie violin solo is combined with oldschool thrash elements that seem to go very well together. The combination is a curious one, but somehow this track manages to captivate all the way until the end. The light and theatrical vocals of singer Marta Muszynka really add up to the formula that makes Open Access stand out on its own. The album continues with ‘Kozak’, a song that is entirely sung in Polish. Kozak has that amazing Slavic sound that I have come to love from so many other bands within the genre, and is a great addition to the other songs on the EP. Although it is clear that the band is still searching for a sound of their own, the transition between the songs seems to be solid and fluent. ‘Into the Storm’ is the third song on the album, which really brings down the pace of the album. The guitars and drums create a dark yet melodic sound, that is accompanied by a sad an melancholic violin. The only thing that really kills the mood in this song are the vocals, which sound a little out of tune every now and then. The last song of the album is the title track ‘Over a Mountain Peak’. The song starts off with a great composition between keys and violin that create a warm and mythical atmosphere that contrasts nicely with the melodic sound of the rhythmic guitars and drums. This track really shows what the band has to offer in terms of composition. Halfway throughout the song we hear some Humppa influences which makes this the ideal party song for a stage performance.

I was a little skeptical when listening to the album, but Open Access has really hit the mark with ‘Over a Mountain Peak’. The songs are varied, and the many different elements and influences from other genres create a nice diversity on the EP. The band may not be 100% unique in terms of originality, but Open Access has managed to create a recognizable sound of their own. I’m curious to see the direction the band will be heading in next!