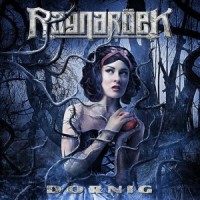 Usually when I review a new album I will go back and listen to the band’s previous release, which I did in the case of Germany’s Ragnaröek by listening to 2011’s “Eiskalt” (“Freezing” or “Cold as Ice”) and remember this being an average release, not bad but not super memorable either.
So now to 2015’s new album “Dornig” (“Thorns”) which I may call my surprise of the year as this album blew me away upon listening to it. Ragnaröek has turned up the heaviness while being less folky/medieval which has led to a new sound although not far removed from previous work. While vocalist Charon has been known for his bagpipe work in the past, it seems to have taken a back seat on this release for him to concentrate on vocals more and I believe is a move for the better (although I still want the pipes too and they are still present just less so) When you hear the pipes in any release, you immediately think of bands like Skiltron, In Extremo, Salatio Mortis, etc. but I think Ragnaröek sound more like a less industrial version of Rammstein with a little of the swagger of Alestorm and the grittiness of Motorhead on this release.
One thing is for sure…..the songs here all seem to be a lot catchier with hookier riffs and a beefed up and crunchy guitar sound…..I defy you to not want to start flailing your arms when the main riffs of “Irrenhaus” or “Schattengold” are playing…..There is probably a little nu-metal sound here too, but not to the overtly written for that style, just coincidence. Folkier tracks like drinking anthem “Trinkfest 5-4-3-2-1”, “Mann” and “Hungrig” will give you a little time warp to “Eiskalt” but again still having a more contemporary, edgier sound. Another amazing part of this is the use of bass breakdowns with the drums….just screams for a massive pit to break out in every song.
Tracks average about 4 minutes in length which works perfectly for their sound since I don’t hear 10 minute long tracks working with their sound…..the songs are written to be hit and run, get in and get out. Production is much livelier than previous releases and certainly helps to propel the album forward in a big way. Jaw breaking riffs, catchier tracks and a little more metal and less medieval/folk sound has really served Ragnaröek well……a great new album from them…..now, get back in the pit and start going to town….