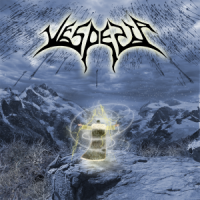 It seems that Vesperia have been around forever….at least since the fact that their last release “An Olden Tale” came out in 2013 but seems like it was lifetimes ago. I guess when you listen to it 1000 times it seems like forever. Luckily, some new stuff is looming on the horizon for our Wacken destined Canadian crew in the form of this 3 song EP. I think saying Vesperia is folk metal is not really accurate…..I would like to think they sit somewhere between “Progressive” ”Thrash” “Death” and “Symphonic” or actually, all of the above. We could go as far as saying “Viking” too based on their original LP “Voyage From Vinland” when they were still known as Bolero but over the last few years their sound has changed and maybe even a little more so with this new EP. Bands that seem to pop into my head when listening to Vesperia would be Aether Realm and Wilderun immediately where the songs just brim with musicianship and heaviness while still being to me pretty accessible but not commercial by any stretch. The 3 songs here are two new epics and what I guess would call a cover track.
EP opener “The Western Tempests” has classic Vesperia written all over it…..with keys and piano intro before punching you in the jaw with a wall of blasted beated thrash and vocals with a nice interlude in the middle before the tasty guitar solo and then back into the maelstrom. 2nd track “Iron Saga” has a little more of a symphonic feeling to it but not to the overly progressive side but just a tinge more keys to it and a little more diversity in time signatures and changes/riffs. Both of these tracks are like a master class in riffing 101….a seemingly infinite amount of styles and techniques crammed into each song and not just the guitars but from the bass and drumming perspective as well. Alas, the last track “In The Hall Of The Mountain King” I had thought was a cover of the old Savatage classic and was delightfully surprised that they went after the Grieg original composition and metalized it for us. The original I feel is one of the more “metal” pieces in classical music history and Vesperia has pushed it even further into the metal side…..a lot of fun to listen to.
This is one EP that really needs to be played loud to appreciate the mix as at lower levels a lot is lost but with volume comes the necessary decibels to appreciate the heaviness here. With only 3 songs, it is hard to get super excited but it is better than a lot of these singles being released recently which got on my nerves. There is enough here to keep me at bay until the album comes out hopefully extremely soon.
With July filled with a Canadian tour and then to Wacken they go, let us hope Vesperia are putting finishing touches on their next album when they get back……by that time, my 1000 listens of this EP will be about finished…..