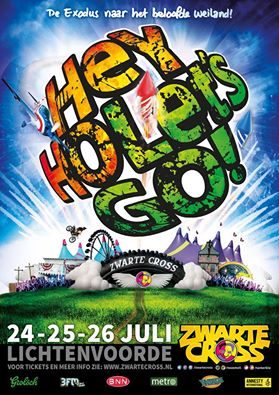 Three day of ‘Zwarte Cross’ in Lichtenvoorde, The Netherlands. For the ‘die-hards’ at the festival-camping even four, because they can start even on Thursday. Madness, sheer madness has taken over the back-corner of our little country. Three days of beer (Grolsch), motorcross, music, beer, fair, stunts, beer, theatre, workshops, beer, nice food, mud, sun, rain, storm and more beer. And still I’m convinced I haven’t put into words what Zwarte Cross is.

Amongst bands of this year, where Flogging Molly and Fiddler’s Green, so we had to go again, what a burden :). But after nice weather at Friday, they predicted storm and lots of rain over the Netherlands on Saturday. There was a warning not to take your trailer on the road and to make sure when you’re at a camping-site tighten everything thoroughly. Not the ideal weather for an outdoor event like the Zwarte Cross. A few items where skipped, it’s simply to dangerous to do motor stunts with storm and rain. While Fiddler’s Green was playing in the early evening and Flogging Molly closed things up on the mainstage this day, we decided to skip the first hours of this festivalday.

Fiddler’s Green
We arrived in heavy rain at the end of the afternoon and thousands of people left the site, wet to the bone. But WTH, they organisation announces on facebook, the event will be for free this evening. Thousands came to the festival immediately and so, it wasn’t less crowded. The area is huge and normally there’s lot of space, but due to the heavy rain, people where hiding in every roofed space they could find. This caused a huge crowd in the MegaTent, where Fiddler’s Green was playing. This should be bad, but when the ‘audience’ is only there to get drunk, the band which is playing is not very lucky. The band was a bit dazed and confused by this sight and the sound wasn’t perfect as well at the start. But Fiddler’s Green had lots of nice songs for us, and there was even a small ‘Wall of Folk’, when they played ‘Rocky Road to Dublin’. And the more up-tempo songs are received well, but it’s obvious the ‘real fans’ of the band didn’t succeed in reaching the area in front of the stage. This was a bit of a struggle for the band, but they succeeded quite well.

Normally we’ll enjoy all the nice things the ‘cross’ has to offer in between the bands we like, but due to the rain, we do the same as everyone else, looking for a nice dry spot to stay a while. We decide to go to the ‘Undercover tent’, where a Cure-coverband is playing. This tent is not as huge as the tent where Fiddler’s Green is playing but there are lot’s of people here as well. But we find it a much nicer place to stay. The band is very nice by the way, doing all kind of Cure-stuff.
We decide to grab a bite and there’s plenty of that. There’s something nice to eat for everyone. And then… it’s has become dry. Great, we decide to walk around the site a bit. And after struggling through the mud we find a nice, quite dry spot to sit, a nice tribune at the back of the main-stage field.
Walking around it’s great to see, how very well organised ‘this mess’ is. When the heavy weather was predicted, all banners and other stuff, which could be a problem was removed, and now when the wind was easing, lots of people were busy, taking them back up. Repairing some smaller stuff. And as we learned afterwards, a shelter was arranged for all the people at the camping-site, who lost their tents in the storm. Great work!

Flogging Molly
Well, from our nice point of view, we could see, more and more people gathering in front of the main stage. So, it was time to get our asses to the front area. When the great ‘Aunt Rikie’ climbed the stage to announce Flogging Molly with her great words ‘Knappen met die Zooi’ (Burst with that shit), huge fireworks hit the clouded air. When this had settled down Flogging Molly entered the stage and blew the audience away, with a great show. Amongst less well known songs, the ‘evergreens’ like ‘Drunken Lullabies’, ‘Float’, ‘The Seven Deadly Sins’ and ‘Tobacco Island’ were played of course. The audience loved it, and the band obviously had a great time as well. They couldn’t have done better, regarding this is not a festival where all fans gather to see ‘their band’, but where a lot of people come to have a nice day and see some nice bands while they’re there.

Great end of a nice day, and fortunately for the organisers and all the fans of this event, the weather on Sunday was much better. This event has become ‘a big one’ in the Netherlands, they almost reached the holy number of 200.000 visitors this year.