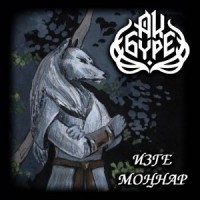 Aq Bure is from The Republic of Tatarstan, a thousand kilometers east of Moscow. A flourishing region, of which Kazan is the biggest and best known city, among others because of their successful football club Rubin Kazan. What can you expect from their début album ‘Sacret Chants’?
Think of Russian lowlands, white wolves (which is what Aq Bure translates to), sung in probably the Tartan language. As for the music, they deliver clear melodies, clean female singing, a little Oriental at times , like in ‘White Hood’, with male vocals mostly in the background, guitars to support the vocals and the occasional solo. The folk instruments seem to come out of the keyboards, if I’m not mistaken, though a video on their Facebookpage shows a violin player on stage. It’s all very accessible and easy to listen to.
The speed is mid-tempo throughout the album. And that’s where it goes wrong. All the songs are mid-tempo. They all start a bit soft, build up with guitars and drums, in come the vocals, there is the little twist in the middle of the song, back we go to where we came from, one more chorus, the end. Several times I had to check whether I was really listening to a new song, or that the previous one was coming on again. And that really is a shame. This now is a nice album, where it could have been interesting if the band would dare to vary a bit more. Especially the speed in which the songs are being played is too monotonous.
On the bright side, it means that there are no bad songs. Then again, no real classics in the making either. I do like ‘Envoy’s Thought’, in part because there are male vocals as well as female vocals. And ‘The Stone Berry’ is a bit more up-tempo. You could bang your head to that any day, no problem.
Would I go see them on stage if they were in the neighbourhood? I sure would. And maybe I would even buy a T-shirt. And if their next album has the same quality and a lot more variation, I would maybe buy that too.