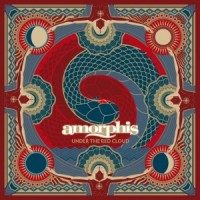 Amorphis is a band that everyone knows by now. For 25 years they traveleverywhere and brought us many many albums. After touring for the 20th birthday of the legendary Tales from the Thousand Lakes album they know how to make there fans happy by releasing an album this year as well.
The album starts with a nice intro on keyboards before the electric guitars kick in. Under the Red Cloud is also the openings song of the album. The first song is very much based on clean vocals, for the people who know Amorphis, you know this is a good thing. Though I felt I missed the grunts a bit, even though they’re there. Luckely for the people who (like me) love the grunts too, you will get some later on. Also there’s a very intense “At the Beginning of Time” ambience trough the song, which will be a big part in the rest of the album too.
Second up we get to a song called The Four Wise Ones, a lot of grunts finally. What I think is the most obvious part in this song and is also an influence that has big part in the rest of the album is the high Tales from the Thousand Lakes sphere. Last of all is that this song (and more to come) have more flutes than Amorphis ever used on all of their albums combined.
The mix of those three things is wat pretty much discribes the album. Usually Amorphis kicks off with a few very catchy songs that everyone knows, but this time the album takes some time to get going. Personally my favorite song is Sacrifice of which they also released an videoclip. Also this song (halfway the album) marks the best part of the CD.
Tree of Ages, the last song I will mention. This is probably the most folky song of the album and for this song Amorphis is accompanied with the great Chrigel Glanzmann from Eluveitie. Together they make a great song for the people that are more into the folky kind of folkmetal.
All together Under the Red Cloud is a great album by Amorphis once more. It has the aspects of Tales from the Thousand Lakes and also At the Beginning of Time, add this to the biggest folk aspect Amorphis ever brought. I would most certainly recommend this to everyone.