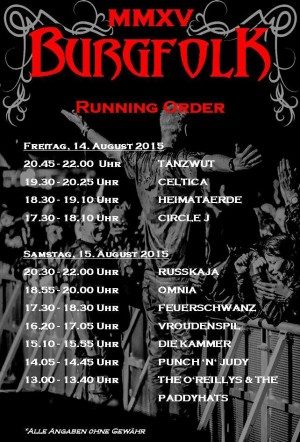 On a very hot Friday, I’ll take the highway to the past. This trip takes me to Schloss Broich (Castle Broich). Once you entered the gate, the cosy atmosphere of this beautiful festival covers you like a blanket.
The folks of this castle aren’t the warriors you should expect here, but friendly people, warm and peaceful. What happened to this fortification, which was once supposed to guard the river Ruhr here.

The answer to this mystery is probably the master of this castle, the lord of this place is very humble, and is hailed by the folks who visit the festival. Whenever he’s looking from one of the windows, or walking on the grounds, people look and stare, giving him ‘The Horns’ or a “Thumbs up’.

Only being here is already satisfying, but what has our big Lord Michael Bohnes cooked up for us today. Out of the lush cellars of this place are picked some nice ripened dishes, but there are some nice new names added to the castle’s menu. Unfortunately I was only able to come on Friday this year, but from a Folk-metal point of view, the nicest bands played on Friday, with Folk Punk from Circle J, Pipe-rock by Celtica and Medieval rock by Tanzwut.

Never easy, opening a festival, and this goes for Dutch Circle J as well. But they’re doing well, they managed to get the attention of the early visitors of the festival. They play folk-punk and they’ll do it fast, because they have only 40 minutes. Well that’s exactly what they did, throwing 40 minutes of nice speedy folk-punk on the folks there. They only made a small stop for a slower interlude, but the rest was a nice bunch of fast tracks. And where you only get banjo or fiddle with the Celtic punk bands, Circle J treats you at the great tunes of a real bagpipe too. This makes their sound in songs like ‘Sunday Mornings’, very nice and contagious. In ‘Diggers’ and the traditional French ‘La ronde des millloraines’ the special folk-ingredient are tin-whistles. Very, very nice.
When you get the applause they got, in the end, you can only draw the conclusion: ‘They made a very nice debut on this festival’, and are suitable for a nicer slot in the years to come.
8,5/10

Heimataerde
For me Burgfolk is all a bout folk and the location is inside a Burg (Castle), but obviously I’m wrong, there’s no folk in Heimataerde what so ever. The key word here is Burg. The guys where all dressed in knights-clothes and heavily painted. The whole set was covered, and drowned in blood. The music was a bit in the style of bands like Rammstein, but not that tight. Drums, guitar and keys, were supposed to do the trick. To cover up the poverty of the music, there was a whole spectacle of blood, swords, blood, blood and blood. And while music is entertainment, I’m probably wrong, I couldn’t appreciate it, but obviously a lot of the attendees loved it.
5/10

Celtica
Pipes Rock, the subtitle of Celtica, says it all. No vocals here, the bagpipes, played by the Scottish part of this international team, do the trick. Accompanied by drums, guitar, bass and violin, the bagpipes tell the whole story. They make up for the lack of skill in the previous band easy, but they do this a bit too easy. Music needs skills and emotion, and just like it lacks vocals, Celtica lacks a bit of emotion too. It sounds all great and they bring their act in a very catchy way, easy to digest, as a big show, I would love to see and hear a bit more emotion in Celtica. Songs like ‘The Piper and the Mermaid’, ‘The last voyage of the great Michael’ and the ‘Drunken Sailor’ bring the folks in the courtyard a lot of joy, they culminates when the covers like ‘Thunderstruck’ and others fill the place. The metal-loving crowd embraces this band when they play this at the end of their set.
8,0/10

The evening is slowly coming to an end, and just before the sun sets down behind the walls of this castle, Tanzwut enters the stage. They start their show in a mysterious way, and this is the tone of their whole gig. ‘Ihr wolltet Spass’ (You asked for fun) is the second song of their set, and this is what Tanzwut is all about. Entertaining the folks with a nice dose of Medieval rock. The emphasis is on the dark and mystical aspects of these Medieval times. The synths give it all a danceable touch, but the use of shawms and bagpipes are taking care of the medieval folk part, but above all they give it this contagious sound.
The show is well thought through and when the darkness falls in they plays songs like ‘Wächter’ (Wächter), where the shawm-players are standing on in front, with and awesome sinister lightning, guarding the whole stage like and temple.
Tanzwut is not only offering fun, but they have fun themselves on stage too. And what this mix of nice music, fun in playing and nice show, does with the audience is rather predictable. They eat it all, there’s a lot of dancing in the courtyard and a mosh pit, from time to time as well.

The band points out they have a nice album out ‘Frietag der 13.’ by changing the backdrop halfway the set into the cover of this new album. And with such a great album out, there are of course songs from that one too, like ‘Brot und Spiele’, songs which can easily keep up with the best of the Tanzwut songs. When they leave the stage in the end they get a very long plea for more from the audience, which makes me wonder if the festival would let them go back on stage. But as usual this isn’t possible at festivals and they have to leave us behind.
9,5/10

No doubt, we will be back at Burgfolk in the future. This is one of the nicest festivals, where folk is key-word.