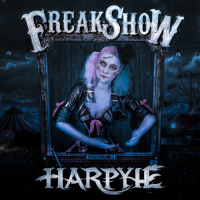 Germany’s Harpyie have returned with a new album entitled “Freakshow” following 2013’s “Willkommen Im Licht”. As I am prone to do, I will listen to the last album before listening to the new album to get my bearings on where a band left off at and where they are headed with the new material.
Upon catching back up with “Willkommen….” I was reminded that this was an OK release with nothing earth shattering on it. Unlike my recently reviewed new Ragnaröek album which blew my mind with their slightly altered sound and definite progression, Harpyie seems to be stuck in doing the same thing as previous releases. While they play some decent folk metal blended with a little bit of a nu-metal sound, I haven’t heard much of a progression in terms of song writing or style from one album to the next. Harpyie have tapped into an idea that has been done before too…..the circus or sideshow concept……Troldhaugen and Saltatio Mortis come immediately to mind. I have come to realize that some bands just happen to better live than recorded and I believe Harpyie also falls into that category.
Is this a decent release? Yes, of course it is but in comparison to some other recent album releases like Amorphis, Merkfolk, Birds’ Way etc. Harpyie will certainly have to step up their game on their next release. If you like the previous albums then the new Harpyie will be on par with those just don’t expect too much of a change from their previous efforts…..