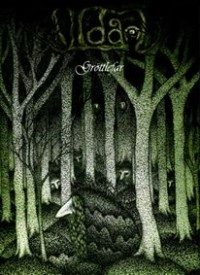 It is amazing how one project may spawn into numerous others. Case in point….earlier this year I drank in the swampy goodness of Bergsvriden which is still in my top releases of the year. A few weeks ago I was introduced to the epicness of Midvinterblot and found out that Trollpung also plays in Bergsvriden.
In chatting with him he informs me that Trollmania of Midvinterblot has a project called Illdåd and now here we are checking out the debut EP entitled “Gröttlefar” It appears that this has been out since last year so shame on us for not knowing about it sooner….in any event having another gloomy swamp folk metal release is always welcome to see the light of day in my opinion and this doesn’t disappoint. We have 5 songs of murky troll folk metal tales in tune with Finntroll, Svartsot, Svartby and Trollgasm with more of a mid-paced style to them then some of the out of control stuff some of these bands sometimes are known for.
Clocking in at around 15 minutes, this EP is great to throw on in between some full length stuff. Opening track “Muntergökens Trolska Skogsfärd” kicks things off with some crunchy guitar and accordion (?) and some mucky vocals with the accompaniment of some female vox too. “Gröttlefar” starts with some nice acoustic guitar and female vox again and a little more folkyness to it but still more mid paced and not humppa at all but more dirgey than anything. “Älvans Dans” is a nice little interlude instrumental piece right into “Ett Odöpt Spökbarn” which is very reminiscent of “Muntergökens….”
The EP closes with “Ensligen” which is another interlude instrumental-type song like “Älvans Dans” Some may wish for more content (as do I) but for what Trollmania has offered us on his first release with Illdåd I am more than happy to wait for more……pair this with the Bergsvriden release and you have two of the best bog laced folk metal from the last year…..yucky, I need some more soon….