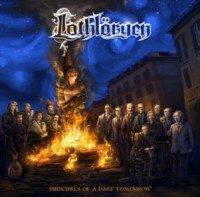 Since I have such laser focus when it comes to folk metal, it is nice when something comes in that is off my radar a little bit and that is the case with the latest release from Brazil’s Lothlöryen. Despite having a 10+ year history with numerous releases to their credit, I am not super familiar with their catalog of work, which is a shame since this is probably one of the best proggy/power metal acts out there.
With their latest release “Principles Of A Past Tomorrow” they are further cementing their legacy with a high quality epic release. I do not know if I would necessarily consider this “folk metal” at all as the songs lean more towards acts like Gamma Ray, Blind Guardian, Lost Horizon, Dream Theater and Hammerfall more than anything else……progressive based power metal I think is more accurate. Are there some folk touches? Sure….”God Is Many” features some violin but is that enough to be a folk metal band? Well, it really doesn’t matter too much as I think this just a fun album to listen to. Without the pretentiousness or overdone /technical riffage of some more progressive bands or just the straight forward “anthem” style songs of others, Lothlöryen balance that fine line in between both.
There is nice use of acoustic instrumentation and Hammond organ style keys in “Time Will Tell” where you can also hear a touch of the ol’ Iron Maiden in here too. What I think I like the most about them is that they take a few chances and don’t just do the same thing over and over but never stray too far into experimental versions of their sound.
With a solid production and obvious musicianship from every band member this is a quality release on numerous levels. Having built a foundation over the years of catchy power metal tracks, they have yet to break thru on a larger scale which hopefully this album will do for them…..
For anyone that is just looking for a good album to listen to that is just great epic metal and maybe aren’t into something overly technical and is more accessible, the new Lothlöryen will certainly fit the bill…. great album.