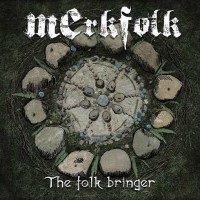 Merkfolk from Poland have read the book of Folk Metal very well. It’s hard to believe this is their debut album. Everything is done so well. And the band has it’s own specific signature. Not only singing in their mother language (most of ‘em do), a prominent place for violin (not so special) and accordion (much less common) but harsh female vocals too (not very often heard in the scene). It all blends together very harmoniously. And there’s more. The songs stick in your head after you’ve listened to them only two times. And yet they are not boring if you listen to them another ten times. That a sign of good songwriting.

The pace is mostly up-tempo, but there is room enough for a little rest. The instruments are well played and the harsh vocals are sometimes replaced by or accompanied by clean female and male vocals. Aggressiveness and calm go fluently hand in hand. Have I said I like this album yet?

Let’s take a closer look at some of the songs.
‘Nananana’ and ‘WIla’ both are perfect examples of the stick-in-your-head- category.

‘Topielica’ is a bit less aggressive, check their video to understand what Merfolk is about.

‘Instrumental’ is … well, instrumental as you might have guessed. As far as I am concerned not the most interesting song, but during a live show probably a nice quiet moment.

In ‘Meadows and Fields’ the accordion and violin steal the show.

The song ‘Merfolk’ is almost a ballad. Not my favourite, to be honest. If I would name a song after my band, I would like it to be a typical song, so that people know what my band stands for.

One of the great things about this album is that even the slightly less interesting songs are still good and nice to listen to. When the band is playing such a song, you are going to get a beer and join the singing and dancing during the next song. Most songs are between three and four and a half minutes. A perfect length to keep your attention. Also because in every song there’s enough going on, with all the different instruments and vocals. A very nice debut album indeed.