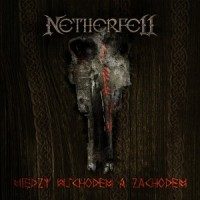 Netherfell is an upcoming folk metal band from Kraków, Poland, that will release its debut album ‘Between East and West’ in October 2015. Although the band has been entirely unsigned up until this point, Netherfell has signed with Noizgate Records for the release of their debut album. The band that was established in 2008 has long since earned a reputation preceding the band well beyond the Polish borders, and the band has shared the stage with a great many folk metal bands such as Ensiferum, Dalriada, Skyforger and many more. The sextet from Kraków combines traditional folkloristic melodies with powerful death- and metalcore elements, which is very innovative for a folk metal project. Needless to say that ‘Between East and West’ has become a very diverse album.

After an eerie violin intro and the song ‘Ghost of Kurgan’ it instantly becomes clear that Netherfell takes a different approach to their brand of folk metal than most bands within the genre. The more metal-like instruments such as the guitars and drums are pushed to the background, making the music rely almost entirely on the traditional folk metal instruments for melody. Instruments such as the violin, tin-whistle, hurdy-gurdy, bagpipes and balalaika therefore play an immense part in the music that the band creates. But it’s not just the arrangements that are diverse, the vocals vary between brute growls and clean female vocals, creating a nice dynamic in the songs. The lyrics that are sung entirely in Polish are mainly inspired by Polish folklore, Pagan beliefs, Slavic cosmological myth and nature. Despite the various elements from death metal and metalcore the songs have a somewhat Slavic sound that is reminiscent of bands such as Arkona and Grai. ‘Towards Fertile Lands’ is a good example of this Slavic sound with its distinct scraggly female vocals. The separate songs follow one another at a rapid pace, but nevertheless the album seems to have a great many tempo changes varying from heavy blast beats to mid-tempo guitar shreds and acoustic intermezzo’s. Netherfell takes us on a musical journey through time, and really leave their mark on the folk metal landscape.

Although Netherfell might be a relatively young band, their debut album ‘Between East and West’ really takes the world of folk metal by storm. Intriguing arrangements, a nice alternation between clean female vocals and low grunts, great orchestration and a wonderful overall feel of the album ensure that the album is exciting until the very end. Netherfell has managed to breathe new life into a slowly dying genre with their unique combination of traditional folkloristic instruments with influences from both death metal and metalcore. Keep your eye out for this band, they might just become one of the best newcomers this year!