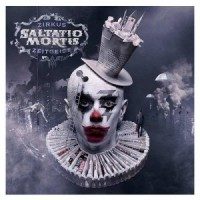 Saltatio Mortis celebrates their 15th Anniversary this year and of course this will be celebrated with a new album.
The band has made another step in their career, they moved from Napalm Records to Universal Records, a step into the world of the big ones. And SaMo as their German fans call them may not be very well know in the world, in Germany their very popular. Touring with the MPS spectacle the whole summer is alternated with rock concerts mainly in the winter. But they’re doing rock-shows in the Summer as well, in fact the big release-party for this new album is at Summerbreeze, one of Germany’s finest festivals.
An other band in their genre at Universal in In Extremo, a band which has a much more rock-sound. Coincidence or not, this Saltatio Mortis album has more rock as well, listen to songs like ‘Des Bänkers neue Kleider’ and you notice the pronounced rocksound. This isn’t a bad thing, it sounds a bit more polished overall, but I’m convinced they won’t sound very different when they’re on stage. This band is full of fun, with lots of practical jokes, and loaded with bagpipes and other medieval stuff on stage, but above all, it’s a band with great skills.
The albums hits off perfectly with ‘Wo Sind die Clowns’, SaMo has an opinion and they like to share it with us, and this doesn’t bother me at all. Little stories in their lyrics, but enough statements. In this first tracks they’re pleading for more humour in this world. The second track isn’t a Christmas-song, not at all, this is a anti ‘X-mas money machine’ song, against shops filled with Christmas-stuff in high summer, when everybody is staying in the pool because it’s too hot.
But they can be serious as well ‘Nachts weinen die Soldaten’ (The Soldiers cry in the Night)…
But above all they like everybody to live the live their want, we are pope, soccerheroes, poets, genius, we can do all, but we don’t know how to live, because we’re never unconcerned.
There are a few songs on this album, which wouldn’t make it to their 25 anniversary album, but the songs I mentioned earlier as well as Trinklied, Rattenfänger and Todesengel are very nice ones and they make this a very nice album.

Saltatio Mortis created another nice album, a bit more rock and probably due to their new label, a bit more polished, but an album with lots of nice tracks, humour and reflections. An album which will find it’s way to their fans quickly. The first signs are already there, all kinds of limited version were sold out quickly.