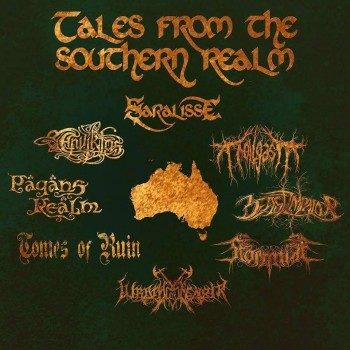 Ah, the compilation….a staple of my teen years…the place where I would find out about so many bands that I have grown to love just by hearing a single track. With today’s music scene always changing, it is nice to see a return of this beloved format with “Tales From The Southern Realm”, a collection of 8 songs featuring artists from Australia exclusively. While not necessarily all pure folk metal, there is a nice cross section of Aussie bands here to get into, with some being more symphonic oriented artists to others being more towards melodic death.
All the tracks here are new to me with the exception of the Stormtide contribution “As Two Worlds Collide” which I reviewed here on the site earlier this year and know already is a winner. While I would normally listen to any album from beginning to end, I couldn’t help myself and went right to the new Trollgasm track “Quest For Honour” which features guest vocals by none other than Wulfstan of the almighty Forefather. Make no mistake, I am probably in the top 10 Trollgasm fans worldwide and think this track absolutely kills. Just for this song alone you need to get this comp. in my humble opinion. From album opener “Awaken The Frost” by Wrath of Fenrir to closer “Into The Sky” by Saralisse there is not a dud in the bunch. All of the tracks here are top notch and show that the land down under is as frostbitten with amazing bands as Scandinavia or anywhere else for that matter. I instantly jumped on Facebook and liked all of these bands as they all have something to offer the folk metal fan. The rest of the killer bands on here (Tomes Of Ruin, Enviktas, Beast Impalor and Pagans Realm) all contributed super solid tracks to this collection too and there really is no reason to start comparing and contrasting as they all deserve a listen. It is obvious that all of the bands believe in this as they are all promoting heavily the release of this epic collection and rightly so.
At around 38 minutes, it is the perfect sampler to what our friends in the Southern Hemisphere have going on in the folk metal scene. Instead of fumbling around on the web trying to find quality music to listen to, grab this and you will have 8 new favorite bands to get into. Kudos to Karl from Saralisse for spearheading this great project…..I am already waiting for Part 2….