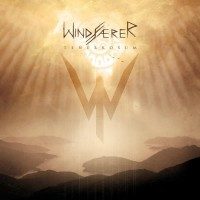 If the second album of Windfaerer is anything, it’s heavy. In your face, pounding riffs, fast. I like it! From New Jersey, the band is on the ultimate black side of folk metal. Mastermind Michael Goncalves is the backbone of the band, doing all the vocals, guitars and bass playing. No clean singing here. Instead a lot of echo, maybe to keep the black metal fans happy. More than on their debut album Tribus, yet not so dominating that folk metal fans will be put off by it. On the contrary, it gives Windfaerer a very specific own sound. You have to love violin player Valcek. His role is equal to the other instruments. Not just a little fiddle between refrains, no, he’s always there.
The story of the album is about a journey to barren grounds. No humppa, no drinking songs. A lot of misery is what you get. The lyrics leave enough to your own fantasy, grim how it might be.
What song stands out? That’s another good thing about the album: there are no fillers. The last five years were spent writing intelligent songs. Each song has plenty to enjoy. ‘Finistera’ has got some great riffs to bang your head to. In ’Tales Told In Oblivion’ there is a lot going on. Surprising tempo changes, a strange little drumming part. Not just fast as hell and filled with blastbeats. The instrumental ‘Santeria’ again is very heavy. The other songs all take about seven minutes; this instrumental one only four and a half. That’s enough to keep your attention. The album ends with ‘The Outer Darkness’. Here the band holds its breath for half a second, only to blast you away one more time.
On their site the band says that a lot of work has been put into this record and they feel that is something truly unique. I couldn’t agree more and would love to see them coming to Europe.