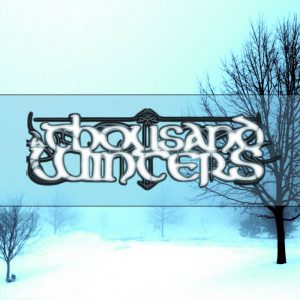 Contrasts are often what makes a band interesting. No lack of that with A Thousand Winters. Consisting of no more than two people, which is something you would rather expect from a black metal band than from a folk metal band. There is big man Andrea. Don’t be mistaken by his name, there is nothing female about the singer, guitarist and bass player. And there is little woman Jolie, responsible for the female vocals and the keyboards. Andrea’s growls are as low as Equilibrium’s Robse on his best days, while Jolie’s voice is clean and rather sweet. A bit poppy sometimes, making me wonder if she has got enough power to bring it on stage.
This duo from Italy has a definite sound of its own. That’s another plus in my book. It does make it a bit hard to compare them with other bands in the scene. The keyboards are always there; no flutes or violins here. There is an accordion, but I suspect that comes from the keyboards as well. The speed is medium to pretty fast and varied nicely. Good riffing, nice song structures. Heavy enough to be proper metal. The songs are relatively short, ranging from 03:23 to 04:18. That’s rather refreshing in a time where a lot of bands don’t know when to stop while the song is still interesting. Jolie’s English pronunciation is not bad for an Italian. Andrea’s growls are as good as understandable.
Another contrast is the overall happy feel of the songs and the somber lyrics. I must admit that most lyrics are beyond me. When in ‘Burnt by Past’ Andrea sings ‘With your hands carving rain sculptures inside me’, I have to dig deep to give that some meaning. But hey, it’s poetry, so make of it what you want. Did you always understand Dio’s stories?

Best song for me is ‘A Frozen Veil’. All the good things of the band come together here. Varied vocals, speed, brutality and harmony. I am curious how they sound live. And I hope to hear more of them in the future. The potential is certainly there.