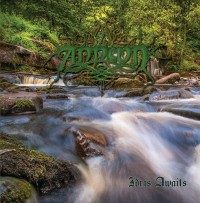 Where are the Welsh folk metal bands out there? Sure we have tons from Ireland, England and Scotland but Wales has not really had a breakout folk metal act of any sort that comes to mind. Well maybe Annwn will change all of that. Active since 2006 and having released a few demos, Annwn have finally issued a proper 4 song EP entitled “Idris Awaits”. I would have hoped there would be some more material given their 9 years in existence but let’s not split hairs here….at least there is something to check out.
Stylistically I am instantly reminded of Calandan Brood, Falkenbach and Oakenshield….. mid paced guitar driven folk metal on the verge of Viking or black metal. Three of the tracks I can only assume have a theme (if not all 4) with the first three tracks being entitled “Mountain’s Sunrise”, “Mountain’s Peak” and “Mountain’s Farewell”……you can’t help but think these tracks go together somehow. There is nice acoustic guitar throughout, most notably in the beginning of “Mountain’s Peak” and the tracks have an ease and familiarity to them which makes them pretty accessible to listen to.
The last track “Suo Gan” is, presumption on my part, Annwn’s take on the traditional Welsh lullaby and the most unique track on the EP as it shows what they are capable of. This is a decent release but not very ambitious considering the length of time that Annwn has been a project and this being the first official release of note.
The musicianship and ideas are evident but a little more drive would serve Annwn well and propel it forward…… if only they were a little hungrier and less comfortable. This is worth giving a listen to for sure and the potential is certainly there……