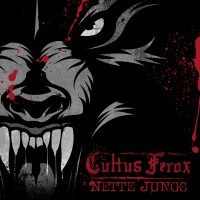 Cultus Ferox is quite a well known name in the German ‘Mittelalter’ world. With their mix of rock, medieval instruments and touches of modern synths, they’re always in for one or the other experiment in music. They started their Medieval career with a Christmas album, and not a regular one….
And now a lot of albums and some DVD further on their road, they come with this solid Medieval rock album. The electronic sounds are still there, but the music has become more solid then I’ve ever heard of them. I must admit I don’t know all their work, but I’ve never heard this solid sound all over a Cultus Ferox album.
Their sound has evolved in the direction of In Extremo. When you would describe their music on this album, solid, sometimes catchy rock, with medieval tunes and lot of bagpipes, does it fit both bands. But don’t be afraid they have their own sound.
‘Nette Jungs’ (Nice Boys) is an nice various album with solid medieval tracks like ‘Aufwind’ and ‘Ligea’. The last one reminds me of Folkstone, and guess by which band they were inspired…. But songs like ‘Spielmann, Reise’ the emphasis is on the rock track and the authentic instruments are used to strengthen this sound. But more ballad like sounds like ‘Stern’ fit them as well, although Cultus Ferox sound is rougher, they remind a bit of Letzte Instanz in this one.
I’m very happy with their ‘heavier’ sound, despite the fact I liked to listen to them from time to time, I never had the urge to see them live. But now I do, when they playing a lot from this album, I would like to see them for real very much.

The best Cultus Ferox album I know by far!!!