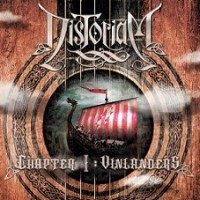 From the lands of the epic Trollwar, Valfreya, Nordheim, Talamyus and probably hundreds of other killer acts (how could I almost forget VOIVOD?) Quebec Canada’s Distoriam have just released their first full length album. Entitled “Chapter 1: Vinlanders” the cover and album title may send you running to the hills for the pending Viking raid but this is more of a very well rounded folk metal release if there ever was one. The influences and song styles are many and varied from Celtic to Pirate to Melodic Death to Power/Symphonic to Hummpa and everything in between.
Think of Distoriam travelling around the world and stopping in every folk metal port and trading with the locals and coming back with riches of folk metal tracks. From album opener “Hymn To Mead” (Hello Dropkick Murphys) to closer “Venturing Forth” there is definitely a Viking theme to the songs here but stylistically a lot more accessible and folky then a lot of Viking acts who tend to have more of a death metal influence…maybe a mix of Korpiklaani, Kanseil and Grimner are the three closest bands I could come up with. Songs range around the 4-5 minute mark which feels right to me with their style and they do get enough material into each song without overworking it. Given the title you may think this could be almost a concept album of sorts but really doesn’t play like one where you have to listen to all of the songs to get the idea…..the tracks stand on their own without relying on each other.
The songs are instantly catchy and grow on you even more with repeated listens. Usually I may listen to an album two or three times and then review it….this one has been with me in the car all week and been on repeat……There is just great fun tracks aplenty here. The mix and production are also top notch with music and vocals having a nice blend but having enough separation to be discernible from each other. I find this to be a very accessible album for anyone into whatever type of folk metal you are into…whether it is some of the heavier stuff to the more mellow.
Distoriam have put together one killer album here and will certainly be on the best of October podcast…..possibly in my top albums of the year if it sticks with me the way it has this last week and I have a feeling it will. Amazing debut album!!!