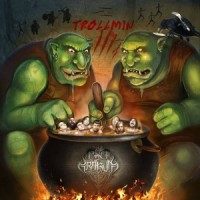 Last year when I reviewed Drakum’s “Torches Will Rise Again” and alluded to looking forward to hearing new material from them, never did I suspect they would go full on troll like they have on their newest release “Trollmin” An EP featuring 6 songs, “Trollmin” definitely has more of an edge than their typical material as it ventures more into Finntroll/Trollfest/Rogatiy Kokol territory then where they normally are at sound wise which is more akin to Skiltron or Celtibeerian. With an Introll (not a typo) and an Outroll (again not a typo) there are 4 tracks sandwiched in between averaging just over 3 minutes a piece in length and all are face smashers and makes me wonder if this is the way they should always sound? Well I could see where this could get to be a bit tedious to continue to play this style all the time but I think it is great that they cut loose and put this together. With tracks entitled “Wall Of Deadly Trolls”, “Magic Potion Of The Evil Jester”, “Troll Recipe” and “Drunk Troll”, you would have to be in a coma to not know what is coming with this release.Each track is overflowing with calamity (in a good way)and I would guess have been recorded after multiple days of binge drinking….man I am so jealous because it just sounds like this must have been a blast to record. I am all about troll-centric releases and this one delivers at the highest level of trolldom. There are no “epic” tracks here just quick blasts of troll goodness and then done. While not as dirgey as say Bergsvriden when it comes to trolly music, this has a fun listen written all over it. If you are really into the typical Drakum sound, this may come as quite a shock to your system but for me this makes me like the entire Drakum catalog even more for putting this out.
I am not sure if they have a new album coming out soon or not but they certainly have tided me over for a good while with this EP. Next time you look out your window and see your fence knocked down and sheep missing, blame Drakum for writing the soundtrack for the troll raid……time to go buy more sheep.