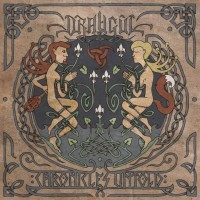 I would think if you were a musician (or any other profession for that matter) you would want to hone your craft and become better at it over time. Such is the case with Draugûl with their latest release “Chronicles Untold”. As this is the third album (2013-“The Voyager” and 2014 “Tales of Loot and Plunder”) one would like to think that it is not repeats of previous releases and this certainly is not. While the core sound is still the same, Draugûl is moving away from the more Tolkien black metal style and gravitating more towards straightforward Viking/darker folk. There are probably also two additional contributing factors to this…..a change of locale (moving from Malta to Sweden) and a member addition (solo musician Vargblod now joined by Enslig). One thing that hasn’t changed is the use of various vocal styles that really adds to the texture of the tracks, giving it more dimension which has always been one of the strongest aspects of Draugûl’s material. What I hear most of all is the full realization of songs that are more memorable and riff driven than previous releases.
Not to say that the first two albums were not memorable, but newer tracks like “The Voice Of Huldra” and “The Jötnar Chronicle” are for lack of a better expression are “catchier” and have “hooks”. I think there is also a better use of layering of various music and vocal tracks here that increase the depth of the songs. While songs may not be as long as earlier ones, with the slight change in style, the lengths work and make for more concise tracks across the board. Production wise, I would hope there would be a little more bass or lower midrange as the album tends to not have much low frequency to it and ends up sounding a little thin but still enjoyable to listen to….Scotland’s Adabroc has the same sort of sound, very high frequency oriented.
Venturing into Scandinavia was just the change that Draugûl needed to fill in the missing parts of their sound and propel it forward. I am not sure if you listened to this album you would immediately know it was Draugûl but it makes perfect sense when you listen to the two previous releases before it. Do yourself a favor and just buy and listen to all three in order and you will hear how Draugûl have grown over the last few years into a formidable act with yet another album of great material to listen to…..great release.