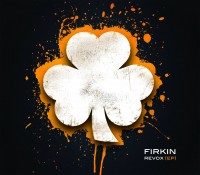 The lads and lass of Firkin have provided us with an EP consisting of 3 songs, to introduce their new singer, Andy (Andor Kovács Nemes). They have taken 3 tracks from their last album, Finger in the Pie, and recorded them again with new vocals.
The first thing I noticed when listening to the first song, Finger in the Pie, is that not only the vocals are renewed, but the music is a bit different as well. Andy’s vocals are a bit deeper and rougher than his predecessor’s, and I personally do not mind that at all! The other two songs on Revox, If I could be the Pope and Parasite’s Lust, musically do not sound very different from the earlier album versions, apart from the vocals of course. Andy’s voice fits these songs very well too!

I think it’s a good thing that Firkin decided to record songs they had already released in the past, so you can really focus on listening to the vocals instead of “having” to listen to a whole new song (although I’m really curious which way it is going on their next album).

I had the pleasure of meeting this band not long ago, at a festival in The Netherlands, and Andy’s live performance is just as great as the rest of the band!

So, in short, I’d say Firkin did a firkin’ good job on taking Andy on as lead singer! Keep up the good work!