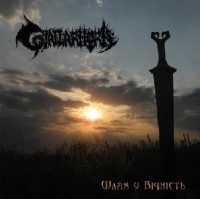 There would be no folk metal without black metal…..and while we specialize in folk metal, my roots are in listening to black metal for almost 30 years. So when a compilation from the mighty WolfTYR productions comes to us, others may flee in terror while I will run right into the fire. Featuring three bands in three distinct styles, this is the equivalent of putting 3 EP’s together on one release. While not getting a lot of diversity like some compilations (1 track per band) I like the way you can get a better perspective of what each of these 3 bands is all about with a few tracks from each. Truth be told, I have had this comp for a while so a review will come pretty easily as I have listened to it numerous times. Of the three artists, you may be familiar with only one of them and that is Gjallarhorn from Ukraine as I had reviewed their album “From Heart Of Mine I Fill The Chalice….” a few months back. They have a total of 5 tracks here….presumably 3 new tracks (“Why Have You Gathered Today, Clouds Of Dark?”, “The Path To Eternity” and “Remembrances”) plus two crushing covers….Absurd’s “Stahl Blitzt Kahl” and Immortal’s “Beyond The North Waves”. While probably considered black metal, I feel they are more accessible than most black metal acts and may lean more towards pagan metal. I think their tracks on here are probably the highlights as they seem the most finished and best produced. Opening the comp is Mexico’s Ravnkald with 4 tracks of thrashy black metal (“White Gods Behind Black Masks”, “Nation Birthed In Blood”, “Ardent Revenge” and “Immortal Sun”) The tracks have an old Dissection feel to them with tons of riffs and time changes. Ravnkald’s production sounds like broken glass shot out a hose…very abrasive and harsh…and hurts the overall feel/mood but the tracks still have enough power despite the razor thin sound. Finally, we have what I would call “a re-issue” of the 2007 EP/Demo “Vinlandic Northern Heritage” by Canada’s Fjörd. While they haven’t released anything new recently, this presumably is either a warning shot that they are still alive and kicking or just a reminder of what they have done previously. With a doomy/fuzz sound, Fjörd probably has what I would call a “retro” sound…like 80’s black metal like Celtic Frost/Hellhammer would be my first impressions but with more of a pagan edge to it. Listening to this makes me long for the old days of the beginnings of black metal so major kudos to WolfTYR for putting this together.
With a multitude of amazing releases (Akashah, Idis Örlög, Witchblood and Wotanorden to name a few…) WolfTYR is poised to take over the planet with an amazing roster of black metal/pagan acts. You had better jump on board the WolfTYR train before it is too late…great release…..