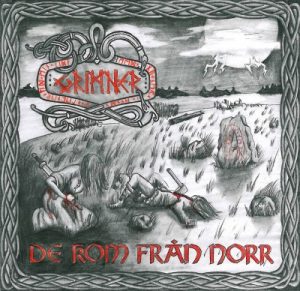 If you listen religiously to the podcast that I do for the site then you should already know that Sweden’s Grimner were in my top 10 albums from 2014 with their epic “Blodshymner”. What a surprise when I heard the news that they were releasing a new EP and that it would be an acoustic based release. The Gods must have heard my prayers for I had wished for something along these lines to be released. After seeing videos on YouTube of the Grimner clan covering Månegarm songs acoustically I was convinced they could record an acoustic album for sure. Along with Baldrs Draumar, they are the only two bands I have currently heard that could pull this off and they certainly have on this EP. We have a total a 5 tracks altogether….4 new compositions and an acoustic take on a track from “Blodshymner”.
Let us start with the “Blodshymner” track which is the epic “Forna Dagar” done in a “swing” style….think of a 1930’s acoustic version with jazz great band leader Benny Goodman included in the mix (look him up)….just a lot of fun to listen to. Of the 4 new tracks, 3 are traditional tracks with vocals all in Swedish (“De Kom Från Norr” “Etterpolska” and “Sorgesaga”) and one instrumental (“Gugner”). As a point of reference, maybe you have all heard the Borknagar acoustic album “Origin” from 2006? This on some level is along the same lines but seems to be more genuinely written as acoustic from the beginning as opposed to songs that are converted into acoustic versions. Think of what Wardruna or maybe Eliwagar does but a simplified/more accessible approach would also a better comparison as well. Yes we all love Amon Amarth or old Enslaved and think of them as “Viking” for sure but could they pull this off? No I don’t think so since I believe Grimner have always been rooted in more genuine and traditional compositions and have made them metal and not the opposite. Alas, the worst part of this is the length (17 minutes) which begs for more to be recorded immediately.
Assuming a new album is in the works in the electric/metal version of Grimner, this acoustic version is something I hope they will revisit soon and not make it a onetime thing. With “De Kom Från Norr” Grimner have once again probably released material that will show up in my top releases for the year.