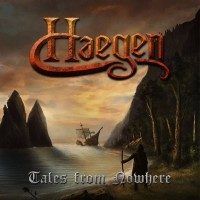 Apart from a demo in 2014, this is the first official record from Haegen. An EP, containing 5 songs, from 6 Italian folk metallers. Right from the start you know what you are going to get. Happy folk, meant to make you sing, drink and dance. Are you into Korpiklaani and Alestorm? This is their love baby.
The first song is the prime example of Korpiklaani meets Alestorm: ‘Dal Castello Alla Foresta’. Especially the voice of singer Leonardo Lasca is very similar to that of Jonne Järvelä of Korpi. Add the keyboards of Christopher Bowes of Alestorm and there is Haegen. Light, fast, happy. Not bad at all. Not great either, though, missing a wow-factor that would make the song more interesting.
Next is ‘Make a Wish’. Rather more of the same, but now with a very odd piece of music when the song is two thirds on the way. However praiseworthy it is to add a little different style to make a song special, it’s not working for me. It’s not fluent, it’s somehow just not right. Like an extra elbow on your arm. Yes, it’s different, but it has no purpose whatsoever.
Then there is ‘Haegen’, the song named after the band. Or is it the other way around? Anyway, prominent keyboards, nicely uptempo. No problem to raise your horns on this one. Sure to create a moshpit .
The fourth song is ‘Russian Disaster’. Counter rhythm, sing along with the chorus and the ‘La-la-la’ and have a good time.
Last one is ‘The Soul Of Your Worst Death’. Surprisingly the beginning of the song reminds me of Savatage. Could they really make some serious good music? Guess again. Not long before the keyboard take over and the music again invites you to sweep your partner across the floor. Nevertheless, I find this the most interesting song. In part because the flute gets a bit more podium than in the other songs and further because the slower parts are nice enough. Here the band shows that they are capable of more than just making simple party songs.
All in all a nice EP. I feel that Hagen have to take a clear direction. Will you be a party band? If so, nothing wrong with that, just be the best you can. Do you want to be more than that? Why don’t you find out how good you can be. You might surprise yourselves.