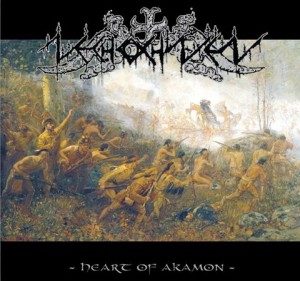 I don’t know if I really think of much in the way of music coming from West Virginia USA unless maybe it is country or bluegrass. Nechochwen have added dark folk/black metal as another musical form exported from the Mountain State and probably the most appropriate style given the state’s nickname.
There is a multitude of influences here style wise from classical to black metal with an obvious comparison to Agalloch upon initial listening but I would like to compare them to Wolves in The Throne Room, Amiensus and Thrawsunblat from Canada with the rawness and energy that these bands also seem to have. The enigmatic and monolithicness of Appalachian Winter is a very strong comparison as well considering the very close geographic proximity to each other.
With a blend of acoustic instrumentation and full on electric arrangements, Nechochwen have carved out a niche for themselves in which they can travel from one extreme to the other, without losing the power and impact by switching styles. Rooted in Native American imagery and subject matter, “Heart Of Akamon” is not forcing the songs down your throat, but more of inviting you in to listen and learn. I found listening to this no different than listening to a band from Scandinavia writing Viking oriented music or any other band writing music based on their heritage. While earlier releases such as “Algonkian Mythos” from 2008 were more ambient/instrumental based, with each subsequent release the material has gravitated towards a more metal oriented sound while still having hints of the acoustic past. A band with a similar path is the mighty SIG:AR:TYR who started with basically instrumentals before releasing “God Saga” in 2010 so it is not unusual for a band to get heavier but nor is it commonplace. Whereas their last full length 2010’s “Azimuths To The Otherworld” was taking some tentative steps towards heavier material, “Heart Of Akamon” jumps right in with both feet. It also appears that the tracks are getting longer and there are less which always means a sign of maturation for me. From opening track “The Serpent Tradition” filled with blast beats and Satyricon styled chords to the epic dirgey album closer “Kišelamakong”, there are 8 tracks here filled with despair, passion and honor. The production is not over the top, fairly down the middle sounding but everything is audible and not drowned out or over driven. While I have enjoyed previous releases from them, Nechochwen have really struck a chord with me on this one…..yet another epic American folk metal release for 2015.