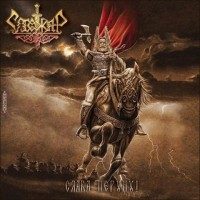 How could we have missed this album? It was released in 2014 and I am glad we found it yet. It seems that almost all of the folk metal these days is from Eastern Europe and Russia. And the standard is high. Am I becoming too easy on them? I don’t think so, because again this is an intelligent, varied, good sounding album.
What’s it like then? Mostly up tempo songs, plenty of double bass-drums, male grunts, female clean singing. Yes, there is a violin alongside the guitar, bass and drums. What gives Stozhar their own sound however is the accordion and even more so: the synths. Those of you who only believe in ‘true folk metal’ as in flutes, bagpipes and all sorts of instruments made in caves a thousand years ago can stop listening after 17 seconds into the first song. ‘Courage and freedom’ features keyboards that makes the song very easy to listen to. They give Stozhar their own identity. This is a happy song, despite the harsh vocals and all the speed. It’s the type of song I want to hear on a September morning when the days are getting shorter and the leaves are falling. Listen to this song and you no longer care about the misery in the world. You want to bang your head, have a drink or two and think happy thoughts. The song ‘Burning alive’ is another good example of a typical Stozhar song.
What do they compare to? Speedwise they are not like fellow countrymen Arkona. I hear a bit of Little Dead Bertha as well, especially in the various vocals. The rhythms are not unlike Black Messiah in the sense that they are often off beat, like in ‘Thank Perun’. Yet Stozhar is very much its own band.
Are there no flaws then in this band and this album? Yes there are, though not many. The guitar could be more prominent in the mix. In most bands there are lead and rhythm guitars. In this album the guitar is mostly part of the rhythm section and doesn’t seem to have a will of its own. One other note of criticism: not all songs will be remembered for centuries to come. If Stojar lives to see another decade, they will still play two or three songs from this album, but they won’t play the entire album, celebrating the 10 years that it exists.
Then again, the first half minute of ‘The Ice Fog Starry Night’ is all I want to hear for the rest of my life. Well, this week anyway.