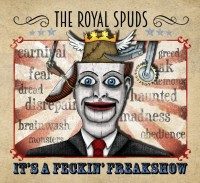 Upon looking at the album art for The Feckin’ Freak Show, you could never tell that it was an Irish themed band. It very much has a feel of American Sideshow poster. The artwork is well done and certainly gives a great feel of a “freak show” vibe.
The opening track has carnival music playing underneath a man announcing for a sideshow tying into the album title and cover art. The second track, and first song on the CD and the title track. It started with a slow melodic beginning and jumped into a fast fancy beat with a kind of Korpiklaani feel. “The Mero” featured some sweet penny whistle and great electric guitar solos. I don’t hear that enough in Celtic punk so that was great to hear. It also incorporated some Irish nonsense words which make things just a little more fun. The next song “Skipping Stones” reminded me a lot of the band The Dreadcrew of Oddwood in both vocals and instrumentals. There were great harmonies in vocal parts with all of the voices which is what reminds me so much of the barbershop quartet feel of Dreadcrew’s vocals.
The next two songs, “Beautiful Girl” and “Mary Goes Round,” are about pretty girls that come into a man’s life. The difference between the two is “Beautiful Girl” has a happy ending, where “Mary Goes Round,” not so much. It is a lesson to sailors to beware of Mary who will lead you astray. The a capella part towards the end of the song reminds me so much of sitting around a campfire at pirate festivals singing sea chanties with fellow pirate reenactors. It is a truly beautiful feeling.
The following song is a very balls-to-the-wall, crazy song with a very Dropkick Murphy’s feel, which is unusual considering the title of the song is “Tonight I’m Stayin’ In”. “The Dying Rebel” is a slow but powerful song about a rebel soldier who gets shot in Dublin. It is beautiful and has gorgeous whistle in the beginning. As I am in a Rebel Irish band myself, I would have loved to hear an even more “F*ck the British” feel in the lyrics. The next song “Silver Linings” takes you out of Ireland for a bit and into Eastern Europe with gypsy sounding accordion “oompas”. It is a fun crazy song with a brilliant melody with a Gogol Bordello feel.
Their take on “Follow Me Up To Carlow” is brilliant! There are many similarities between this version and how my band does it, but The Royal Spuds certainly make it their own, and it is perfect. And their final song is a farewell drinking song; a perfect close to a great album.
By time I finished listening I had completely forgotten that this was a freak show styled album. It didn’t really give off that vibe except for the intro track. Overall a great album musically. In regard to recording, the gang vocals and otherwise harmonies should be mixed a little better. In some places they seem to overlap each other in volume too much. And a bit of advice for the vocalist: the slow clean vocals are just gorgeous, and the harsh punk style vocals are brilliant, but there are some songs where you incorporate your clean vocals into a faster song and it sounds like you are straining your voice some. I would recommend you keep your clean vocals for the slower songs and make the faster songs very harsh and shouting without trying to sound pretty.

Great album. Can’t wait to hear the next one!