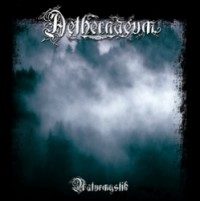 Germany’s Aethernaeum have just released their 2nd album entitled “Naturmystik” following their debut “Wanderungen durch den Daemmerwald” in 2013. Originally a solo project by front man Alexander Paul Blake, Aethernaeum has solidified this now as a band with the 2nd album. Mixing elements of folk and black metal, I think the easiest comparison is a blend of Agalloch blended with a little Helrunar although the songs have more of a straightforward black metal sound then Agalloch and more folky then Helrunar, hopefully this makes sense.
There is definitely more to hear than your run of the mill black metal projects, multiple layered vocal and instrument tracks, acoustic passages, spoken word sections. Interestingly, the album is laid out with the longer tracks (“Die Stimme Der Wildnis” and “Heimreise (Ein Requiem)”) right in the beginning and shorter tracks towards the end, not sure if this was planned for whatever reason but I like the way that it builds to the shorter tracks, don’t worry by shorter I mean 8 and 9 minutes as opposed to 10 or 11. I wouldn’t say that there was anything that was super innovative or mind bending here as far as riffs or song structure but it is a solid album all the way thru. Clocking in at 66+ minutes, there is definitely ample time to get lost in this one. Production is also adequate and relatively neutral, no major concerns sonically. This is a decent listen and has been on repeat for the last two days here so I have to say that it certainly garnered repeated listens for me.
Whether or not this album will have the sustainability of other releases from this year remains to be seen but overall a pretty decent album to check out.