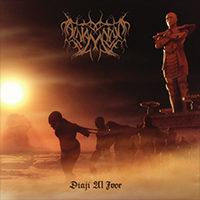 We receive all different types of metal here at the site even though we are a Folk Metal based. Viking metal, pagan metal and of course some good old black metal (like the recently released Selvans album) Now we have received the latest from Al-Namrood from, of all places, Saudi Arabia with their latest album entitled “Diaji Al Joor”.
Starting in 2008, this is their 5th full length album along with some EP’s and splits so they certainly are busy.
When I think of Middle Eastern influenced metal I immediately think of Nile and Melechesch which I would both classify more as death metal if anything. Al-Namrood are not as death metal influenced as they are and tend to sound a lot like old Celtic Frost or Mayhem to me with touches of Middle Eastern music. Whether or not these styles blend well is certainly up for debate as I really do not have much of a reference point. I can’t say I am huge fan of these two styles mixing and it feels very forced to me…. I would be the first to admit that I may not be the best barometer of this style and speaks to maybe this isn’t something we should be reviewing. I applaud Al-Namrood’s efforts in producing extreme music in an area of the world notorious for oppressing metal but I just can’t get into this at all. I find everything to be very cacophonous and not cohesive at all. The vocals and music are seemingly overdriven in the mix and the tracks tend to just sort of drone on. Not my cup of tea at all…. I am reminded of the EP by Yomi which I reviewed earlier this year which had a doom metal feel with Asian instrumentation over it and that had the same results where the styles didn’t work. Al-Namrood has a pretty decent sized following so there are plenty of fans out there for this…. I just am not one of them unfortunately…..