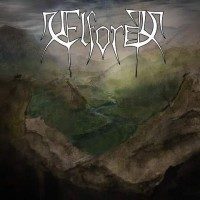 When I saw the name Elforg for a possible review, I knew I had heard of them previously and had to make sure I wasn’t just imagining things…. luckily I was right and found a copy of their 2 song demo from 2014 on my trusty computer. The 2 songs on the original demo were decent but not nearly as finished as could be (it is listenable on their Bandcamp page). Fast forward to 2015 and they have issued a proper self-titled album to check out. Hailing from Poland, this 5 piece play relatively straightforward metal with a touch of folk thanks to Wiktoria on Violin.
The album features 10 tracks in total…. yes of course an instrumental opener and 9 tracks, 2 of which are redone versions of the original demo tracks (“Zapomniany” and “Journey To The North”). From the beginning of first official track “Wezwanie” there are major improvements in overall band cohesiveness, song catchiness and production. Listen to the re-recorded version of “Zapomniany” compared to the original…. slightly more up-tempo, tighter sounding and better recorded. Sonically, I am reminded maybe of some Gjeldrune or Serdce Kamen although I don’t necessarily think they are that close but they sound more power metal based than folk metal I suppose. This is a pretty solid effort but there is really nothing that specifically is jumping out at me on this release. “Through Darkness” and “Do Ciebie Kasiuniu” have a darker vibe to them and are probably the more memorable tracks even though they don’t really have the “core” sound of the other tracks which would be something of a concern if the two songs I remember don’t sound like the majority of the other ones.
All in all, an album worth giving a listen to but whether or not it ends up in your heavy rotation is up for debate….