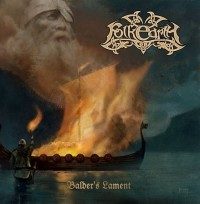 Folkearth, this very special band has been active since 2003. One man started the idea to create music with artists from around the entire world to make one folkmetal product. The outcome is a great many of albums over the years and dozens of musicians performing on them. Baldrs Lament is their 12th record and most likely still counting.

It isn’t uncommon for Folkearth to skip the intro and just go for the real stuff immediately, so with ‘Beliskner’ they just kick in with some heavy stuff.
It’s well known Folkearth has some deep death metal influences in their metal, mixing it with an incredible amount of folk instruments. The main part of the vocals are grunts, very low, the way I like them. In addition to this they also use some majestic clean vocals and of course the beautiful voice of Hildr Valkyrie.
The album is very up tempo and the songs are passing you by in high speed. Yet I don’t feel anything is refreshing or new about this.
Yes, you can hear a great many of influences in the songs, giving Folkearth a style of their own. If you’re into this happy up-tempo folk-metal, you would really like it. For me it’s all a bit too much of the same old trick.
There are still some good songs like ‘Donars Hammer’, but altogether they’ve done a lot better, and so has folk-metal.

In the end I have to come to an conclusion here. Honestly the album doesn’t botter you if you turn it on, but it doesn’t stick either. It’s not bad, neither is it good. And after so many years and so many albums, I just expect a bit more from Folkearth.