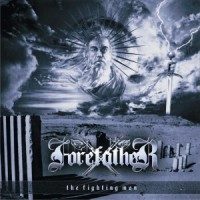 If you are ever lucky enough to review folk metal albums, when someone says the new Forefather reissue has to be reviewed it will almost be like a day off. An album that I have listened to at least 200+ times (estimated) since it was originally released in 2000, “The Fighting Man” is their 2nd album and the 2nd re-issued by the mighty Heidens Hart (1999’s “Deep Into Time” was re-issued previously) Look I already know this album is killer and had better be in your collection along with all of the rest so why should I keep typing? Well, for those of you unfamiliar, Forefather has issued 7 amazing albums in 18 years, including surely a top 10 album of this year for me with “Curse Of The Cwelled”.
Style wise, there is no one that sounds like them and they have a sound which to me is instantly recognizable. Closest comparisons would be Immortal or the mighty Mithotyn I guess but they have a more accessible way about them. I believe it is the variation of the vocals by the epic Wulfstan, going between the death growl and the clean soaring baritone that sets them apart from all others. Let us not forget Athelstan’s incredible work on the instruments with Wulfstan…. two parts of the same whole (they are brothers after all). Tracks like “Together They Stood” and “For These Shores” really show the development of the Forefather sound for me the most here with blast beats, vocal changes, keys, killer riffs…..oh, who am I kidding?
EVERY song has that… EVERY song is epic and EVERY album is epic…. still not convinced?? Buy this album immediately and if you are not completely satisfied with it, send it back for a refund…..not to Heidens Hart but send it to me and I will pay you for it. I would buy this album 100 times before a lot of other stuff that is out there….I suspect I won’t be shelling out a dime. An all-time classic that you should already own but if not, now is your chance.