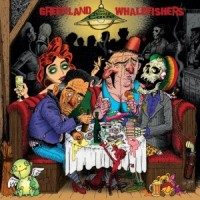 ‘Thirsty Cave’, the second release of Greenland Whalefishers this year. Earlier this year they already released an EP ‘Looney Tunes’, which was a little starter for this full length they released now. Two of the three songs on this EP, ’20 Years of Waiting’ and ‘Looney Tunes’ are on this albums as well. The title of this album is taken from the lyrics of the song ‘Looney Tunes’.
Well, what’s new then? Well, if I would like to keep this short, I would say: more of the same. But this would do the release no justice, but when you liked the EP, you will like this album too. You won’t fall of your chair because they do something very amazing, but there are lots of nice songs at this album. The band proves themselves again as nice composers, the songs are very different from each other, but always with this nice identifiable sound, with the nice high whistle tunes.
Greenland Whalefishers doesn’t have a very heavy sound, don’t expect it to pop up in this album. The songs are nice, sometimes a bit more laid back like in ‘Tinted’, but most of the time nice up-tempo like in ‘None of Us are Faithful’, with a nice dose of humour like in ‘Looney Tunes’, but what to say about an instrumental called ‘Nothing to Say’!

So, nothing very new at this album, but for the fans of Greenland Whalefishers it’s another great album.