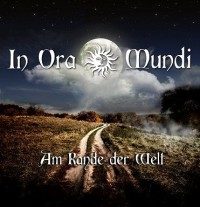 We received a demo once again. Always tricky demo’s, a lot of bands release demo’s to let the world know what they’re up to. But we always have to keep in mind, these demo’s are made with limited money, often by starting musicians. Limited money means, no money for a studio with sophisticated gear, no real producer. This can be heard most of the time, so it can’t be judged like a real album.
This demo is from the new German Medieval rockband In Ora Mundi and is titled ‘Am Rande der Welt’ (On the Edge of the World). On this demo we find 4 tracks, but only 3 songs, the fourth track is a bonus-track and the same as track 2, but this time with some guest-musicians.
‘In der Rabengasse’ is a nice rocksong with nice bagpipes, one of the core-instruments of In Ora Mundi. The sound is a bit poor, it’s obvious this isn’t recorded in the best circumstances, but as mentioned before, this isn’t the issue with a demo.
The second track ‘Sieben Tage’ is a nice typical Medieval rock hit, like the previous one this is a nice song, with again nice bagpipes. The vocals are the most intriguing, but they’re OK. But when you don’t have the means to record this professionally, the least you can do is practice, practice, practice until your fingers fall off. So when you play a guitar-solo, play it right! And when you hit the cymbal, get the timing right.
And the third song sounds is again a nice one. The intro is great, very nice to hear these Germans released a demo with three nice songs, the song-writing is in very good hands with these guys.
When you think of a bonus as a nice extra, you’re better off when you push the stop button now. The second version of Sieben Tage sounds if Karina entered to rehearsal room to say hello, heard the song a first time and joined in. The vocals don’t sound nice together and the adjustment which are made instantly can clearly be heard. A pity the guitar-solo is just as bad as the first time. Even when you’re not a skilled producer, you should have heard this song doesn’t belong on a public release. Better another song or leave it with three tracks.

This demo ‘Am Rande der Welt’ throws me in all directions. The quality of the production isn’t the best, but that’s something you can seldom hear in a demo. The biggest compliment goes to the song-writing, the songs are more than OK, you definitely would like to hear them live. In Ora Mundi would have had a much better rating when the music was done right to. And the fourth track shouldn’t be on this demo.
So, this leaves me with mixed feeling. I hope to hear more from these guys, but there’s work to do.