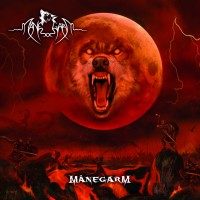 Oh, what torture it is to have to review the new Månegarm album….. if you can’t sense the sarcasm then I apologize and if anything the torture would be inflicted on you for having to wait for another 3 weeks for the official release. By now, I would like to think you have heard/seen the video for the first single “Odin Owns Ye All” (no it is not a cover the Einherjer song if you haven’t heard it). If you like this track like I do, then I am delighted to say as epic as this song is, it is probably my least favourite on the album…. getting jealous yet? If it is possible to digitally wear out an album in three days, I have probably done it with “Månegarm”. This, by far, seems to be the most diverse, powerful and complete album they have done and that is saying something considering the incredible catalog of releases from this Swedish horde. From the battle scarred to the introspective, Månegarm have put one together for the ages in these 10 tracks.
Opening track “Blodörn” at just over 8 minutes was a huge surprise as I think having a longer track at the beginning sometimes can be a little sleepy but this is an uplifting start right into the signature jaw breaking track “Tagen Av Daga” which is more in tune with the Månegarm tracks I think you all think of when they come to mind……mid paced double bass drum driven, tasty immediately memorable riffs, vengeful vocals along with layered backing vocals…it’s all here. Where things change and make this an even more epic release is after “Odin Owns Ye All” where there are more folk and acoustic based tracks and this is what threw me for a loop. For a band that has lived on the electric side of town, the 2nd half of the album adds more on the acoustic side (no I didn’t forget about “Urminnes Havd”….their acoustic based EP from 2006) “Blot” and “Vigverk –Del II” are simple back to back 3 ½ minute vocal, acoustic guitar and violin driven tracks…. very ancient and thought provoking. “Call OF The Runes” “Kraft” and “Nattramn” bring back the traditional Månegarm track style while “Bärsärkarna Från Svitjod” and album closer “Allfader” also stay in the acoustic realm. The songs are put into such an order to go back and forth between styles and it works perfectly.
Album production is also extremely polished and understated, not a lot of frills which is exactly what you would want for this.
An instant classic? Not sure what the specific criteria might be for one but it is only the 3rd album this year to get a 10 from me and has monopolized all of my music listening areas and it is not even officially out yet…. yeah, instant classic it is and the best album Månegarm has put together….. purchase it immediately upon its release…..