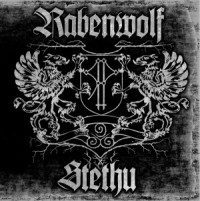 This summer I saw Rabenwolf on the most beautiful festival of the world (or so the claim) Dark Troll. They were one of the last bands to play and I was positively surprised. My expectations weren’t high and yet I liked their enthusiastic performance. This is proper folk metal the way I like it: pretty fast and loud. Now, a few months later, listening to this 5-piece EP, I wonder whether I liked them partly because I was getting tired and had had enough to drink.

What do we have? Seven boys and girls from Germany. A growling singer, some folk instruments beside guitar, bass, drums. And keyboards for a full sound. In 2011 released their so far only full album ‘Aus alten Zeiten’. So, singing in their native language. They are into regular folk metal. In fact so regular, that they don’t really stand out. That’s not saying the music is bad, because it’s not. It’s just rather mediocre.

Starting with ‘Stethu’, it sounds a bit tired. On an full album, you would call it a filler. Somehow it doesn’t really get going. The next song ‘Traumes Tiefe’ is more like it. Nice melodies, enough speed and variation, some clean singing alongside the growls, a big role for the flute. This is what makes Rabenwolf enjoyable. ‘Aurora’ is a little slower. Sounds a bit like Black Messiah. Number four ‘Welk’ is a bit of a surpise. It starts with a rather long instrumental intro with acoustic guitars. Then after a little whispering, the vocals become more brutal again. This song shows that Rabenwolf is capable of stepping outside the boundaries of standard folk metal. Fifth and last song ‘Sumpfhexe 2.0’ is a short little story about a witch. Again not bad, though the vocals are at one height during the entire song, which is a bit boring in the end.

So, a nice enough EP. Not remarkable in any way. Not a great jump forward from their debut album. If you love your folk metal, you will probably attend the famous Ragnarok festival in Germany. I will. And Rabenwolf is there in 2016. Again my expectations won’t be high, But somehow, I wouldn’t be surprised if I like their performance again just as well.