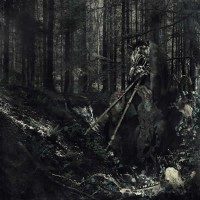 If you need a soundtrack for your upcoming Halloween party then look no further….the latest release from Italy’s Selvans will certainly be all you need and will probably come with some woodland spirits as an extra bonus. Entitled “Lupercalia”, the album follows the release from earlier this year of an EP entitled “Clangores Pleniluno”. Having heard the EP I had a relatively good idea of what to expect, more or less…..the EP to me had a symphonic black metal vibe to it. The new album carries it one step further in terms of overall feel and concept with tracks longer in length and deeper in darkness. I do not know if there really is much in the way of folk metal here (a folk instrument here or there) as to me this is a black metal album if there ever was one. On your black metal guide chart I would say start with some Watain attitude and then mix in some Arckanum mysteriousness and Limbonic Art musicality and you might be in Selvans territory……guess what? With those 3 mixed together you are bound to have a deadly potion and Selvans is just that. There are a total of 6 tracks here….the obligatory instrumental opener “Matavitatau” which spills into the 10 plus minute “Versipellis” replete with mist shrouded vocals, blast beats, drawn out keys and dirgey guitar….sounds perfect right? It darn near is…..the remaining 4 tracks average almost 12 minutes in length and have very similar footprints as “Versipellis”. There is not much deviation in song style/structure but if it works on one track then 4 more will help to increase the power and magnitude of the whole album. While the “Clangores….” EP was like the movie teaser, “Lupercalia” is like the whole movie trilogy box set. “O Clitumne!” is more mid paced and keys driven and the shortest of the remaining tracks at just under 9 minutes and probably has the folkiest feel to it of any of the tracks especially in the middle of it. “Hirpi Sorani” adds in some more woodwind instruments (presumably pan flute and whistle) to augment the track here and there and fill out the missing spaces. “Scurtchin” probably has some of the most disturbing parts with some added sound effects in with the Selvans template. Album closer “N.A.F.H.” at 17 minutes closes the album and successfully goes between black metal and almost a soundtrack style to it. At just over an hour, this is as complete a black metal album as you will get and whether or not Selvans is OK with this tag is up for debate but why fight it? Dimmu Borgir and Cradle Of Filth wish they could write an album like this and for a debut you would be hard pressed to find a better one. All Hallows Eve couldn’t come quick enough this year……with “Lupercalia” you can now make every night Halloween with this epic album…..trick or treat…..