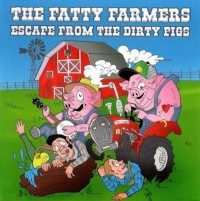 Wow, I’m excited, we received another The Fatty Farmers CD. I loved their previous album ‘Refarmatory’, which was just a hell of a record. This one is called ‘Escape from the Dirty Pigs’, again a self-released one. And to jump to the final conclusion at ones: ‘why aren’t these guys with a label?’
When you’re not deeply into Celtic Punk, The Fatty Farmers is such a band as you expect. When somebody asks you out of the blue, name a Celtic Punk band, Flogging Molly comes out easily. And when you like that, you like The Fatty Farmers as well. They play this nice kind of music in the style of Flogging Molly, let’s call this a nice conservative version, as to be expected from some farmers. But despite the fact they haven’t invented something new, but this doesn’t come a a dime a dozen. Not at all, listening to The Fatty Farmers is just as much fun as listening to Flogging Molly, and by adding mandolin, whistles, accordion and bagpipes, they might sound even folkier than their big American brothers.
This albums starts with ‘Carrot Man’, nice up-tempo at once, with a nice farm-feel. The second one, ‘Dirty Tricks’ has an even more farm-feel and has a bit of a hill-billy sound, one of rare tracks, which can’t please me.
But with ‘Freddy’ they’re back on track, one of those Celtic punk tracks in which the accordion has a nice dominating role. It doesn’t matter if your name is Freddy or otherwise, when you hear ‘Freddy’ you move your feet. With ‘The Kings of our Farm’, the Flogging Molly feel is back completely, very nice song with ever-so-nice whistles.
Haven’t heard enough folk yet? I can’t imagine this, because there is plenty of it, but the instrumental ‘Gafitaeh’ with banjo, accordion and whistles is an overdose folk for the weak-hearted, I just love it!
‘Grandma’s Drugs Lab’ is one of the hit-songs on this album, very nice fiddle in this one too. After this it’s time to take a little rest with ‘Doubt in my Heart’. Writing this may be boring, but when you go back to another hit-song, it’s not boring to listen to at all. Accordion, whistle mandolin, the works, it’s all in this nice track.
But where are these bagpipes you spoke off earlier, you think? Well, here they are ‘Invictus’, nice, punky and full of bagpipe. A song which could be on an album of The Black Tartan Clan as well.
Not tired yet? Well, these Spanish guys go on and on, with ‘There’s A Treasure Everywhere’, the accordion and fiddle will move your feet until they fall of. And the record doesn’t end here. The band doesn’t stop and has this odd song ‘Under our Kilts’ for you, with nice violin tunes at first and very odd developing melodies later on, turning into a ska-like track and back.
‘Fanegas T.V. Show’, ‘Queen of Drag Queens’ you name it, this albums delivers nice songs continuously. Unbelievable how they can produce all these nice songs in the 16 months since their previous album was released.
Mmm, what could we wish for after all this, some more bagpipes maybe? Oh, damn here they are ‘When Our River Was A Beach’, bagpipes and vocals take care of the first minute of this song, their introduction adds up to a nice, very danceable track in the end.
I can’t decide which instrument has won on this album was it the fiddle or the whistle? Well, they will fight about it in ‘Dancing Duels’. But to be honest, when this short track is over, I still don’t know.

But I do know who has won today! The Fatty Farmers! What an album, very nice, send them over I like to party on their songs.
What a great album they made with ‘Escape from the Dirty Pigs’, when you like your Celtic/Folk-punk in the style of Flogging Molly, you simple need to add this one to your collection. Not simply a rip-off, but The Fatty Farmers are a perfect example you can be heavy influenced by a band without being a copy-cat. With their nice mix of mandolin, whistle and fiddle and bagpipes here and there, they’ve deserve a spot between the big names in this genre.