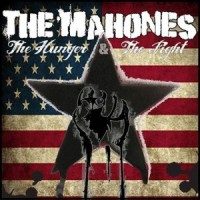 25 years of The Mahones, not simply celebrated with a ‘Best of…’ but with an album in two parts. Last year the band released besides a live album, the first part of ‘The Hunger & The Fight’, a fabulous album. In my opinion the best Celtic Punk album I’ve ever laid my hands on. Despite of the fact there was leaning heavy on the folk and less on the punk, which was the intention of the band, it was a fabulous masterpiece.
Now we have the second part of this album, and of course this one is tipping over to the punk side. But on this second album, folk-elements can hardly be found, and this is what bothers me a bit with ‘The Hunger & The Fight’ part II. Gorgeous punk all over the place, and the band does a fantastic job with the mix of this music. A well produced album, in which all things clearly have their own place, but you get the feeling these punks have just crawled out of the gutter and put their asses in a garage to record some stuff. For this they deserve great admiration. It’s obvious the band has two beating hearts, one is a folk-heart as they show in the first part of this album and the other is a punk-heart. And if you don’t know the band yet (where have you been the past 25 years), the band is a big fan of Stiff Little Fingers, no wonder they have a cover of them, once again. One of the other bands they covered on this album is Dropkick Murphys.
On an album with the emphasis on punk, Kathy’s voice must have a prominent place, ‘Fuck You’ is the track in which one of best raw female punkvoice has the leading role. Love this track!
Besides the intermezzo ‘Reambra’ the only folk can be heard in ‘The Parting Glass’, a nice ballad with folky whistle. After this a little extra ‘Dancing in the Moonlight’, a Bruce Springsteen cover, which can keep up with the original.

‘The Hunger & The Fight’ part II is a nice punk album, which shows the punk-heart of The Mahones needs no surgery, it’s beating strong, just like their folk-heart, as shown in their previous release. If only there was more folk in this one…