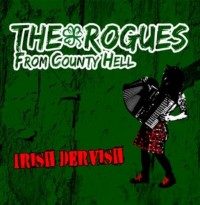 Well, well, one thing is for sure. This album has been on our desk for a few months, but it hasn’t become covered with dust. It was played and played all over again. The Rogues from County Hell, is a one of those typical Irish Folk punk band, with lots of Irish folkmusic, happy, cheerful and with Irish pride. But The Rogues from County Hell have a strong punk heart as well.
In the style of bands line The Royal Spuds and Finnegan’s Hell, they produce a high speeds Irish Folk with banjo, accordion and whistles. This works out very well in the nice song they have written themselves, but in old songs like ‘The Leaving of Liverpool’ as well.
The songs almost burst out of the energy these nine Germans put into it, simply a joy to listen to. A band which is undoubtedly a joy to experience live.
The only downside of this album is the large number of covers ‘The Leaving of Liverpool’, ‘The Star of the County Down’ and ‘The Irish Rover’, all songs we have all heard in numerous versions by all kind of Folk punk bands. It’s always a joy to hear them live, but on an album, there should be more ‘own’ songs.

But with all this said, The Rogues from County Hell are simply a great new band in this genre, which have proved themselves to be a very nice band. I wouldn’t mind to see them live once, and in the meantime I’ll wait for an album with more songs of their own.

The Rogues From County Hell