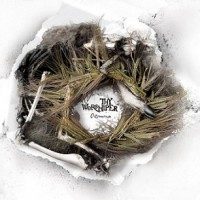 Oh what long strange journey it has been for Thy Worshiper. From the beginnings with Capricornus on drums from the mighty Graveland to founder Marcin Gasiorowski moving to Ireland from his native Poland and to today has been one epic trip. From beginnings rooted more in black metal, Thy Worshiper has created a sound onto their own with black metal still at its core blended now with folk, pagan, jazz, soundtrack and progressive touches. From a comparison point of view, I think Negura Bunget’s trajectory music wise and sound wise is a relatively fair comparison with maybe even a little Primordial given their Irish connection. “Ozimina” features 6 tracks averaging 6-7 minutes and each song seems a lot longer than they actually are as Thy Worshiper transports you away quickly. Opening track “Brzask” creates a dismal mood with music, vocals, percussion and sound effects and you will feel like you were just dropped into the middle of forest at night. This sets the stage for what is to follow….Thy Worshiper taking you deeper into their world from which there seemingly is no way out. I think “avant-garde” would really be the perfect word(s) to describe Thy Worshiper as they do not seem to be confined in any such way to having to stick to “black metal rules” and play music that is relatively linear and low fidelity. They take chances and let the music/songs breathe and find their own path….I would almost say they sound like jam sessions that have a little more structure to them from a start and end point already arranged…..probably a nod to a lot of doom acts that have this same vibe. After repeated listens this album will really get under your skin but in a good way. I don’t know if this is necessarily would be in everyone’s “listen to all the time” albums as it has a dissonance about It that makes it overwhelming…..just like one of my favs from this year… Arstidir Lifsins “Aldafodr Ok Munka Drottinn”…..although not quite as monolithic but certainly has a similar feel to it for me. From a production point of view, there is still a fogginess to the recording that enhances rather than inhibits here……muted and yet has an openness to it at the same time. Equally disturbing and enchanting, “Ozimina” shows that Thy Worshiper haven’t lost a step and have progressed even without having a huge catalog of music to have built to this point. As previously mentioned it will get under your skin for sure…..sorry there is no antidote and I wouldn’t take it anyways if there was one. Great album.