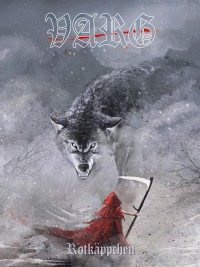 In the scene Varg is well liked. More than once have they made their appearance on the Paganfest-tours. Especially in their home country Germany, Varg is a big band. But let’s not confuse popularity with quality. Their Viking metal, or battle metal, is rather simple and predictable. That in itself is not a bad thing, if you are AC/DC. But it is, if you are Varg and want to keep the fans happy with an EP.

No less than 6 versions of the song Rotkäppchen which was originally recorded 4 years ago. You are not going to win a lot of new fans with this. Maybe you’ll attract some attention because of the guest musicians from Trollfest, Alestorm and Eluveitie. But who is going to play all these versions more than once or twice? One of them, the acoustic Rotkäppchen in Bierzelt, is almost 17 minutes long. In my view, that’s 15 minutes too long.

The two other songs are okay. ‘Ein Tag wie heute’ is a typical Varg song. Riffing guitars, hoarse vocals, tight drums and bass. Not much wrong here. ‘Abendrot’: same story. The fans will certainly like it, but again, it will not attract any new fans.

So, what’s the purpose of this EP? I don’t get it. Almost 50 minutes of music, of which 80% are versions of an old song. Better make a proper album, even when it takes a little longer and a little more effort. This is a waste of time.